✅ Trip Verified | Johannesburg to Durban. Shocking attitude from all the staff. Pretentious and entitled. So disappointed. I was standing at the gate with a coffee waiting to board but nobody called last boarding calls. So walked to the desk and the staff were appalling and refused me onto the flight. Literally on the button for gate closing time. I will never use FlySafair again, even if their fares are the cheapest.
2/10

"we were very disgusted with the service"

Not Verified | East London to Cape Town with FlySafair. The inflight service was absolutely abominable. The air hostesses went down the aisle once then closed the service for stocktake for the rest of the flight. That is poor management, stocktake should happen after the plane has landed and the passengers have disembarked. Also they did not come and remove the rubbish and asked the passengers to clean up themselves. We were asked to place the rubbish in the seat pocket. So we were very disgusted with the service I believe that that is a management issue and that needs to be addressed promptly.
2/10

✅ Trip Verified | Johannesburg to Cape Town. Very bad service at the airport, nowhere were it states that wheelchair people are required to be an hour early for check in, we were 5 mins late and sent to book new flight. The guy standing next to us had the same problem, he was helped very fast.
2/10

"It was a good flight"

✅ Trip Verified | Cape Town to Johannesburg. It was a good flight, departed in time landed before schedule even though it was a bit of a rough landing due to the fact that the weather condition were not suitable. And it is value for money. I only paid R536 rand and I got a window seat. What I'm not happy about is that the beer was so hot but I won't complain. 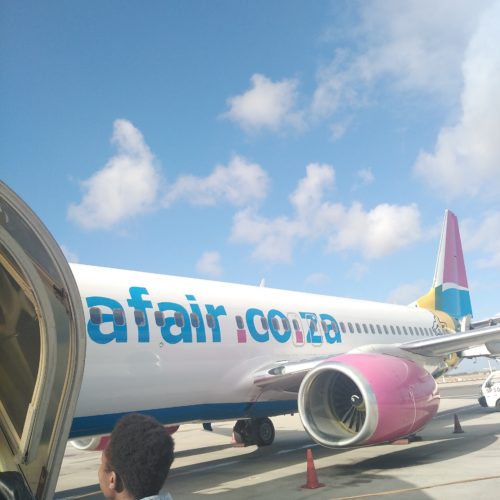 Not Verified | Johannesburg to Cape Town. Absolutely worst service dealing with a lost bag. 2 of 4 bags were lost. One has since been recovered but no one can locate the other. No one is being helpful and they're telling us what we want to hear not what is actually happening. We cannot continue with our holiday because they're stringing us along and we have to wait for the bag to be recovered. We are staying an hour and a half from the airport so it is even harder to plan the days waiting for this bag.
10/10

"I had the best flight"

✅ Trip Verified | Durban to Cape Town. I had the best flight with my 3 kids. Best staff. Was assisted by staff who went out of their way to make sure that our experience was the best. They really are an asset to the company. Everything went smoothly, on time and well organised.
2/10

✅ Trip Verified | Durban to Johannesburg. Customer care is extremely poor. FlySafair is another typical airline with zero scruples. They are willing to make one pay additional for a flight change but reimbursement for a cheaper flight isn't re-compensated. One should just clap their hands and be thankful.
1/10

✅ Trip Verified | Cape Town to Johannesburg. Absolutely pathetic staff service at baggage check. First the staff where arguing amongst each other as none wanted to help me. Then the lady looked me in the eye and mumbled stuff in her own language twice during the process. Never smiled once and did not exchange any pleasantries. I will next time pay more just to avoid this type of service
10/10

✅ Trip Verified | Durban to Johannesburg. Excellent. The flight departed on time and actually reached early. The airline also kept me posted on all aspects of the flight. I even got an SMS indicating the carousel number of my baggage. Excellent service and I will definitely fly with Flysafair again
1/10

"my dissatisfaction as a customer"

✅ Trip Verified | I was so excited as this was my first time flying. I arrived early so I wouldn't miss my flight from Joburg to Durban I then checked in and was then told to go to gate C12 at 9h30 Am, then a lady checked our tickets and advised we can go sit elsewhere as we were complaining of the coldness of the boarding area. She then advised we can come back at 10h50 for Boarding . When we returned we found 2 lines and were not sure which one to join so I went in front to ask the lady who was going through the line checking the ticket which line to join and she just said go at the back of the line to me and other people who were also enquiring about the same thing. We then all went to the back of the Priority boarding line as per her instructions ,n ext thing we know after standing in the line she tells us we standing in the wrong line and we need to go at the back of the other line. I was so disappointed at her lack of customer care etiquette and strongly feel it should be addressed. We then arrive at our Destination and we were seated at least 3 seats from the back so we took that time to take Selfies of us inside the plain for the 1st time while moving to the front to my shock the English lady flight attendant rudely told us to stop taking selfies and vacate the plain. I asked her why she had to be so rude as it is not as if we were still seated but moving to the front. She responded by rolling her eyes and didn't bother acknowledging my dissatisfaction as a customer nor did she apologize either.
11 to 20 of 62 Reviews