"I was very pleasantly surprised"

✅ Trip Verified | Toronto to Vancouver. I had low expectations having never flown Flair (or any discount carrier) before, but I was very pleasantly surprised. Flight was on time, comfortable (standard or better) legroom, smooth ride, and friendly crew at gate and in plane. When I booked, the flight was about $800 less than mainstream carriers ($650 v $1476 on Air Canada or WestJet). I paid extra for a carry-on ($35) and a coffee on the plane ($3 w free refills), but did so gladly given the huge savings on the fare. Because I had prepaid for my carry-on bag, I got called to board earlier than most people. The flight was about 75-80% full, I had a window seat near the front that I selected for free during check in. Obviously Flair is missing the perks of (a) loyalty points, (b) lounges, (c) inflight entertainment/wifi and an app to check arrival time and gate, and (d) frequent flights in the event of schedule changes, but of those the only one that matters to me is (d). As such, I will use Flair only when I'm not cutting it close with my timing and need confidence I can get where I'm going on schedule or close to it. For any trips with a bit of flexibility, if Flair flies there, I'm flying with Flair. 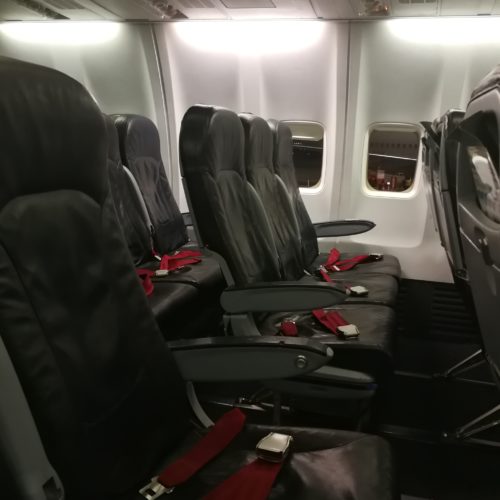 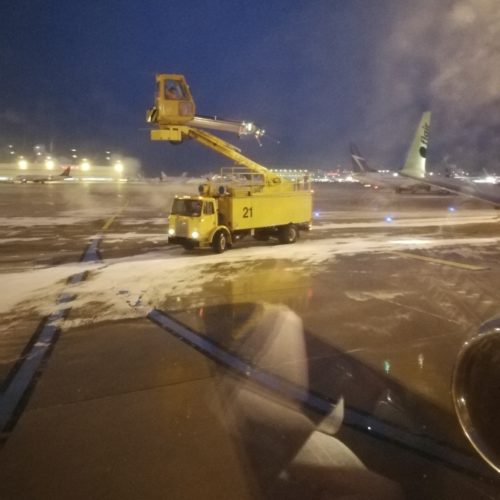 "I highly recommend them"

✅ Trip Verified | Toronto to Calgary via Winnipeg. We had an excellent flight with flair. We were travelling with our almost two year old. The seats were comfortable. The staff was great. Our flights were all on time and the break in Winnipeg for our daughter to run around was great. It is definitely a no frills airline and you have to pay for extras but with snacks packed and minimal baggage it was super affordable. I highly recommend them.
2/10

✅ Trip Verified | Toronto to Winnipeg via Calgary. I was scheduled to travel with my two 10 year old kids from Toronto - Winnipeg - Calgary on January 5, 2020 at 6pm. We were informed of delay after delay with our plane with no explanation from the gate staff. We were shuffled around to multiple gates at the Toronto Pearson Airport until 3 am the next morning for a plane that was never to come. We were unable to get a hotel room because we were constantly told the delay was just a few hours. The airline staff rarely gave us updates, and when they did it was that they had no updates. There was no communication between their Head Office and the staff and all of the passengers were left in limbo. There was no compassion on behalf of the employees; they seemed more interested in socialising with one another than trying to find answers for 60 passengers. Food vouchers were provided to us late in the evening which did no good since my boys and I just needed sleep at that point. Flair Air is a tiny privately owned airline with no partner airlines and so they will not help passengers to find flights on other airlines. They have very few planes in their fleet, so if your plane goes out of commission you could be stranded not just for a few hours, but for a day or two (the passengers flying to Winnipeg were stranded for up to 2 days in Toronto). There was a huge lack of transparency, accountability, and compassion by the airline. My experience left me feeling like we were all just treated like cargo. Yes, it is a discount airline and I'm all for a good deal as a single mom, but we have a right to be treated with dignity .. there's a fine line, and Flair Air does the opposite. After a total of 16 hours at the airport, we finally got on a different airplane the next day. If you choose Flair Air and things go wrong, just be prepared for extreme delays, no communication, and no assistance. They will offer you a refund for the leg you haven't used, but because it is discounted you will still be forking out hundreds more dollars per person for a last minute flight on another airline (For me it would have costed an extra $1500 just to get back to Calgary from Toronto). I tried to communicate my grievance to their support line and was told they were not willing or obligated to do anything else to remedy the experience we had. I highly recommend going with a more established airline that has more planes and partner airlines and that can accommodate its passengers adequately, and won't leave you stranded like Flair Air does when things go wrong.
1/10

"do not recommend this airline"

✅ Trip Verified | Winnipeg to Calgary. I definitely do not recommend this airline for passengers who has a busy schedule. Most of the flights are delayed. I have not left for my flight coming up in a few hours. It was originally scheduled for 8:30pm. It was then delayed for an hour. Then i recently received a notification that it was delayed for another 2.5 hours. When I check the airport website to confirm the time, i was given a different time of 2:00am. Now this causes confusion. Tomorrow is actually a Monday and also my first day back to work after the holidays. It irritates me that it would be delayed for this many hours. I tried to confirm the actual departure time by calling the airline but then was disappointed because the hotline is closed. At this time I am furious, how can you be an airline that delays flights and your passengers is not able to contact you for questions. That is just ridiculous. I then contacted the airport and the staff I talked to told me that they were not given a lot of information either and that many passengers are also asking the same questions. He had told everybody that the flight time they were given was 9:00pm. To this time, I am still unaware of the departure time and I am not comfortable on waiting at the airport for 4+ hours when I could be waiting at home instead. Side note, you are only allowed to bring a personal bag that has to fit under the sit and you will have to pay for the rest of your baggage. Also, inflight food and drinks are not provided.
10/10

Not Verified | Calgary to Abbotsford. Awesome and super friendly, thanks so much! Really appreciate the local service in Western Canada. I am looking forward to flying with you in the future.
3/10

✅ Trip Verified | Toronto to Calgary. Not impressed. Small seats. Required to pay for everything. $50 checked bag, $50 carry on bag. No attention paid to kids that were travelling with us. It could have been a much better experience.
1/10

✅ Trip Verified | Calgary to Vancouver. Worst airline I’ve ever experienced. Tiny seats. Have to pay for water. Horrible service. Under staffed. $50 for carry on. Had to wait 30 mins at baggage claim for bags to arrive. Never again. Only bought to save money but ended up costing more for baggage.
9/10

Not Verified | Abbotsford to Toronto. Amazing crew from the bag drop to the attendants. Travelling with three young kids is hard but all the staff was great and loved how we could push our baby right to the gate before loading and once we arrived it was already waiting as well. We would definitely fly with Flair air again! Keith and Alexi were our favourite flight attendants. Thanks Flair!
3/10

"Not sure if it was worth it"

✅ Trip Verified | Toronto to Vancouver. Not sure if it was worth it. Nearly 30 mins late without explanation, communication or cause. I thought we were spending a lot of time on the ground at YYZ. I realized this myself as I’m looking at the time and wondering why we are not on the ground yet. Flair won’t tell you they are running late. The seats are noticeably shallow, as in the don’t really support your thighs. And mine was broken and wouldn’t recline. I don’t really mind if they ask you to buy any beverage or food, or even a carry on. Not looking forwarding to my return flight.
8/10

✅ Trip Verified | Edmonton to Toronto. I had some trouble with booking through a third party. It ended up working it out after getting a credit card number from the third party who booked my flight but If I wasn’t able to get this credit card number they would not have let me on my flight. I would advise anyone booking through a third party to arrive to the airport early. Other then this the flight was good it left on time and arrived on time. Flight attendants very friendly and funny. I would recommend flying with flair.
11 to 20 of 370 Reviews