✅ Verified Review | Nairobi to Dar es Salaam with fastjet. The Cabin Crew were the only good thing on this flight. I work in hospitality and the customer service we received was appalling. The only reason we knew that there was a flight time change was because I read every email twice even if they are reminders. Otherwise, the email with the flight change of time was sent as a Flight Reminder with no actual indication that there is a change of timing. When I called the sales office at 4am (when customer service is meant to open) to query if this was correct and not a typing mistake, she said yes, when I asked if there was any way to change the flight, as our party needed to be in Nairobi by 11.00 pm latest, she said no very rudely, then I asked if she could assist us with another airline and while speaking to her, she cut the phone. When calling back to speak to her again, we were on hold for 9 minutes before giving up. When trying to discuss this issue at Dar Es Salam airport, the attended stared at their computer not even acknowledging the fact I was talking to them, with no response after explaining what happened. When checking in, our attended didn’t look up once. I asked a few questions with no acknowledgement. After asking the same question four time, my friend told me to give up as it is clear no one was interested to help. Even though the flight was not full, we were seated on the very last row, where the seats were so small, I couldn't fit in them. Luckily our Cabin Crew were very nice and let me move, and spoke to another passenger about swapping. We had planned a surprise birthday party for one of my friends when dropping her home, as she just turned 25, however as we didn't get back to our homes until 1.30am, everyone had to leave, and the entire surprise was ruined. Luckily again, the cabin crew were nice and made a announcement on the overhead. Honestly the entire experience with this airline apart from the cabin crew is a serious disappointment.
9/10

"plane was new and comfortable"

fastjet is a low cost airline, so if you are used to this type of airline, nothing will surprise you. We flew from Kilimanjaro to Dar es Salaam and paid for 1 piece of baggage which wasn't expensive. The plane was new and comfortable compared to other airlines on this route. The check-in was smooth, boarding quite fast as well. Flight left on time and arrived a bit ahead of schedule. Nothing really to complain about.
1/10

We flew fastjet from Johannesburg to Mt Kilimanjaro Airport as my family and I had a 4 day game park safari booked. Bags were to be sent straight to Mt Kilimanjaro as there was a transit in Dar Es Salaam. When asking staff at Dar Es Salaam where the bags were just to make sure checked in bags were still with us, they advised us that they had no idea where the bags were - staff were clueless. Then they assured us that it would reach Mt Kilimanjaro based on where we asked for it to be sent, instead of actually tracking the bag. Upon reaching Mt Kilimanjaro, we waited for our bags(which held all our safari supplies and clothing for 4 days). Nothing came and a claim had to be lodged to find our bags. The lost baggage counter staff called someone from fastjet and found out that the bags were still in Johannesburg. I cannot understand why fast jet Staff could not tell us this information when we asked them in Dar Es Salaam. Took 3 days to find our bags, and by then we had just blown $700US on supplies and clothing for 4 days. We requested the airline to send the bags to Arusha airport as that is where our safari agent could have picked up our bags, but they were rude and refused to assist us with the small issue despite them being the ones who missplaced our bags and did not complete their full service that we paid for( transporting bags and passengers) on time. Will never fly with them again.
1/10

"hard to get in touch with them"

fastjet from Windhoek to Dar Es Salaam. Plane was alright and comfortable for this price. Cabin crew was friendly. You pay for your drinks and beverages on board. But they lost my luggage, and are not willing to pay any of my costs as they say they don't take any checked in baggage through another airline. Be aware of this, because I couldn't find this in their terms and conditions! I found it also really hard to get in touch with them.
8/10

"get what you pay for"

Johannesburg to Dar es Salaam on fastjet. Flight was ahead of schedule on arrival, ground staff were quick. The food and beverages have to be bought onboard. You get what you pay for, its a no frills low cost airline. So far so good.
9/10

"what a welcome surprise"

What a welcome surprise fastjet is, giving real competition to Kenya Airways, whose fares are significantly higher. For about 80% less we flew them from Lilongwe (Malawi) to Dar es Salaam. They departed and arrived on time. The plane was new and comfortable. Yes, they charge for additional services, but the customer has control of how much beyond the very low fare they want to spend for advance booking, more advantageous seating, baggage, and food. Even with all the extras, our fare remained very low.
4/10

This was my first time flying with Fastjet. I selected it after reading mostly good reviews and that they are using bigger jet planes compared to the competition on this route. The ticket price was very good and the booking process rather simple. Now the bad part - I couldn't check in online for the flight. I headed to JRO airport with plenty of time. When I arrived there was nobody at the check in desk. Apparently the flight was cancelled and I was informed via e-mail and voicemail just 2 hours before departure and while I was on my way to the airport. They had rebooked me on the next flight (8+ hrs later) and I was refused reprotection on another airline. As a matter of fact there was a Precision Air flight leaving 3 hours later. I was told I could get a refund (only for the base fare and not for the extras like baggage fees etc) and then pay for my own ticket. The staff was apologetic and understanding. No food voucher or any other support was provided. I had to wait almost 9 hours at the airport. This is not the fault of the local staff but rather an issue of the upper management. They should look after their passengers better and have provisions when flight cancellations occur. I will think twice before booking with Fastjet.
4/10

"not a bad experience"

Flew fastjet from Dar Es Salaam to Johannesburg and two days later on the return flight. Not a bad experience overall. The cabin could be a little more tidier and cleaner. The cabin crew could smile a little bit more. I felt like I was bothering the lady whom I asked for coffee. It would also help if they could mention somewhere pre booking that you will have to pay for checked in luggage. I ended up paying for both flights a total of $50, for checking in a backpack which only had my toiletry (as these are not allowed on carry-on luggage) and a pair of flops. We were also delayed out of Johannesburg by almost an hour, the reason given was that the aircraft doing the flight arrived late (the same aircraft that does the inbound flight from Dar es Salaam) and once we were allowed to board,we were then stopped on the jetway at the aircraft door as we had to wait for both the pilots to come from shopping at the duty free shop. We started boarding again after they had passed us by into the aircarft, shopping bags in hand. I found this very unprofessional and have written a complaint by email to fastjet. Still waiting for a response.
9/10

Clean cabin, helpful and friendly service. Most of my fastjet flights left on time. I used Fastjet between Dar Es Salaam and Uganda, South Africa and Malawi. Flights were over 75 per cent full, especially Uganda and Malawi. This is a budget, no Frills carriers. Flights were smooth, great service and clean cabin. 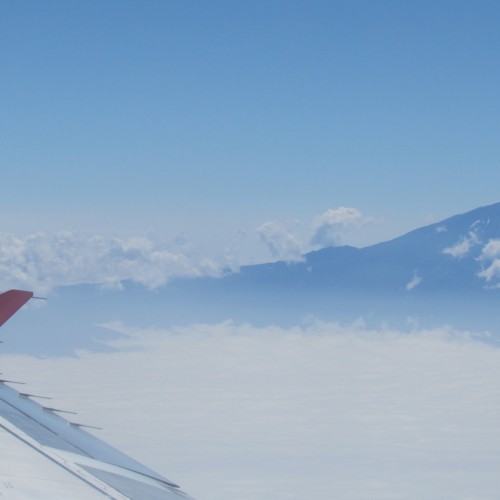 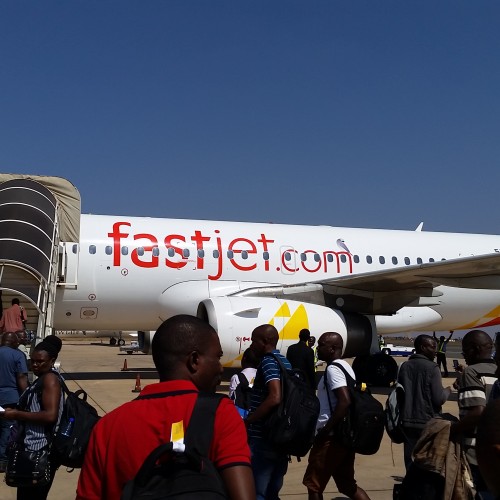