"flight has been cancelled"

✅ Trip Verified | Milan to Kharkov. So my flight has been cancelled. I have receive email with this info at 19:48pm when departure time was 5.30am the next morning. When I arrived to Milan Malpensa airport at 1am I found Ernest info point which was closed and no person in the airport didnt know something about the reasons of cancelling my flight. And now i am waiting 5 am when info point is opened and i will be able to understand the reasons why my flight was cancelled and how can i return to my homeland.
1/10

"extortion of money for luggage"

✅ Trip Verified | Kiev to Bologna. Aggressive policy on extortion of money for luggage. My claim is mainly because they do not properly notify about the fact that they do not allow holding any small objects in hands which normally are allowed in the cabin by other airlines. I had only one small backpack as hand luggage and my suit (which is whatever but definitely not the second hand luggage). They forced me to pay and give my backpack to the baggage. Normally the airlines do not consider man's suit in a soft case as an additional hand luggage, and the crew hangs it the cabin. But instead I had to put in the shelf. And finally my tripod which was tied up to the backpack was lost. I think it is stolen. And this is the responsibility of the company. It would not be stolen if it was in the cabin under my control. I wrote my claims to the company and didn't get satisfaction.
1/10

✅ Trip Verified | Venice to Tirana. Avoid like the plague. Absolutely horrible service at check in. Arrived 2 hours early and had to dash to security because of lack of signage and terribly slow service at check in lines. Baggage policy is very strict—15kg limit and 7 euros for every kg over. Agents were outwardly hostile.
10/10 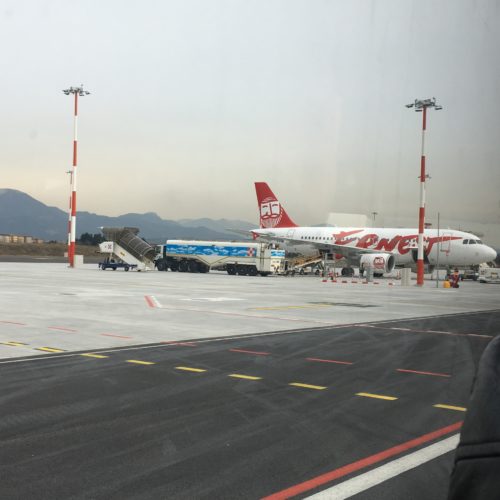