✅ Trip Verified | Cairo to Dubai. Very disorganized and misleading information about check in desks. The staff I dealt with have poor English language skills. The good side is a new aircraft.
8/10

✅ Trip Verified | Athens to Cairo. Flight departed on time, on Boeing 737-800. Cabin was clean and the seat was very comfortable. There were IFE monitors but there was no entertainment playing, only music channels. Food was good and refreshments great. If they offer alcohol would worth Business class. Even though they are the only one on the route that offer real Business seating than Euro business. 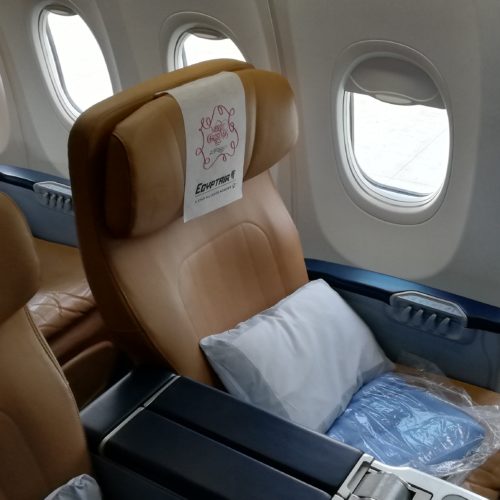 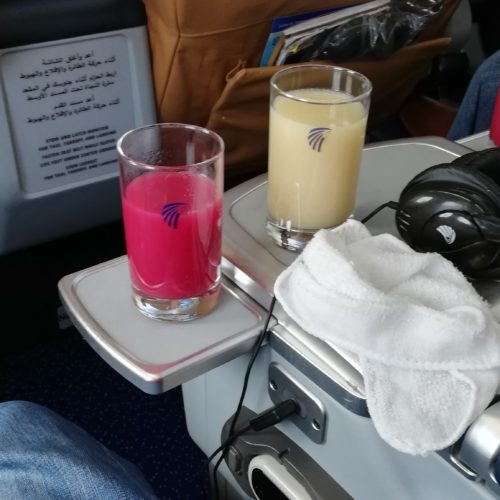 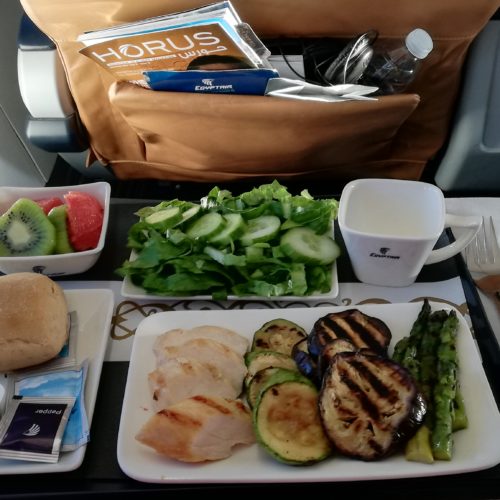 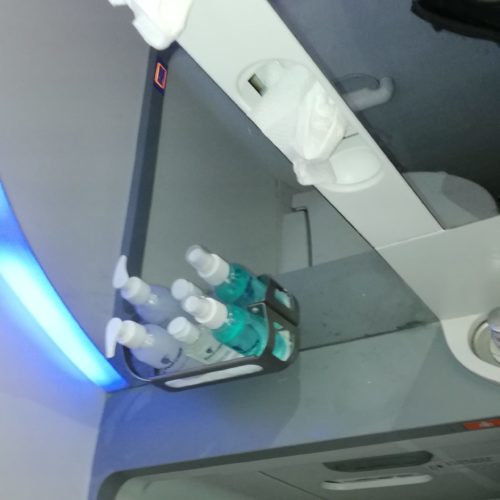 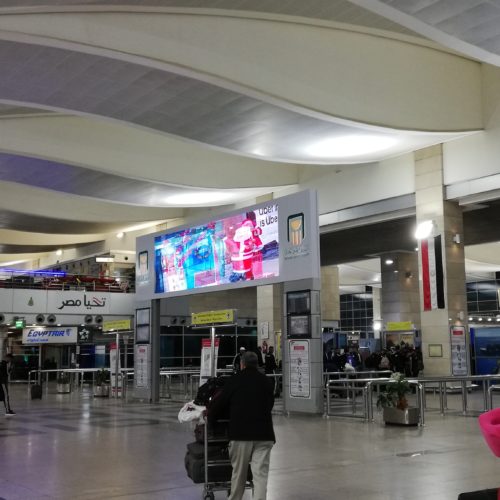 ✅ Trip Verified | This airline does not operate 24hrs service. The customer service number is never reachable, when it rings nobody picks up. The customer service at the Cairo Airport is the poorest I have experienced. The washrooms at the Cairo Airport is worse that public washrooms in most African countries. I am a very unsatisfied customer.
4/10

✅ Trip Verified | Really bad experience with Egyptair. Unfortunately we took a multi-city flight and both of them were not very pleasant. Staff are rude. First flight I was asked if I was using my pillow, so I said I will use it as it was a 5 hour flight, the air hostess took it from me and never came back with one. Second flight I saw how one of the air hostess was shouting several times and at different people to move from the corridor. Very rude and aggressive behaviour, just shocking. I was asked if I wanted chicken or beef but I was force to take beef because there wasn't more chicken. Flight back was almost the same, rude staff, missing food twice (Bangkok-Cairo-Madrid) I was asked: beef or chicken. I said chicken and I was told that my food was coming. After 10 minutes when everyone else was served, me and the lady next to me asked where was our food. They had forgotten and again was forced to take beef because they sold out all the chicken. Dreadful customer service, I won't ever fly again with Egyptair.
1/10

"luggage did not arrive"

✅ Trip Verified | New York to Nairobi via Cairo. We called multiple times and spent more than ten hours on hold, plus sent multiple emails into the void, trying to get a refund for my sister’s supposedly refundable ticket. We talked to the customer service agent at JFK, who referred us back to the web site and email — so we shouted again into the void. Weeks have passed. Still nothing. Then my priority tagged luggage did not arrive and I filed a lost luggage report. The web “tracker” still says check back later, and my address and luggage information are incorrect. I emailed their lost luggage department days ago but have received no response.
8/10

"Egyptair is having a come back"

✅ Trip Verified | Dubai to Cairo return both flights left on time and arrived ahead of schedule. Outbound was A330 an older plane which looks a bit tired on return was a brand new Boeing 787 with new leather seats and big 12 inch screens it’s a fantastic aircraft was so quiet during take off and landing which was very smooth crew were friendly and helpful but Egyptairneeds to look into the grooming standards of its employees as well as they need to change this uniform which in my opinion doesn’t reflect the legacy of the airline or the country . Food was ok, the entertainment IFE is with limited options not so many selections, however on the Boeing 787 they have live TV of Euronews and sky news I think Egyptair is having a come back and reviving itself well done MS
1/10

✅ Trip Verified | Abu Dhabi to Casablanca via Cairo. Flight was late leaving AUH by an hour for no apparent reason. The new A220 does not have business class seats so regardless of me having a paid business class ticket the seat was the same as the economy section. The late departure from AUH meant my bag missed the connection in Cairo. I had to return to Casablanca airpor At my own expense the next day to collect. Disappointing quality of service with no concern for passengers. 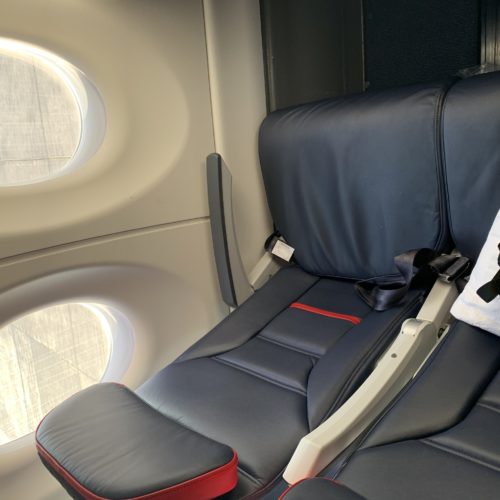 "not worth the price they charge"

✅ Trip Verified | Aswan to Cairo on a 3-month old Airbus A220-300 with Egyptair. Seats are hard and there was no IFE of any kind. No alcohol at all served on board. Cabin crew well-groomed and quite friendly. No announcements from the cockpit. Cookies and one round of drinks served during this 75 minutes flight. Departed and landed behind schedule. Wi-Fi available but did not work during the entire flight. Overall, an OK experience but not worth the price they charge for this route.
9/10

"improved a lot since last year"

✅ Trip Verified | Bangkok to London via Cairo. Check in at Bangkok was quick with no queues in all classes. The new Thai lounge was right across from our gate, and is a big improvement from most of their lounges. The lounge is huge. Boarding was disorganised, with door A for economy and door B for business when normally it is the other way around, leading to confusion. There were also Egyptian security agents checking details at the gate in Bangkok. I received a warm welcome on both flights and found my seat. Bangkok flights really should get an aircraft upgrade. The A330 is not suitable for this route. The seats in business and economy are only mid-haul quality, but the flight is 10 hours long which makes it a long-haul flight. The seat on the 777 is much better. They’re both angle-flat seats, but the 777 has more pitch, which means your legs aren’t shoved into some tiny compartment under the seat in front. On the A330 this at least has the slight benefit of having the TV screen closer to you, unfortunately the headphone jack was not working. I didn’t mind as I caught some much-needed sleep. Entertainment was rather spoilt for choice but I don’t like the lack of action movies. The amenity kit given on both flights were an improvement from last year, with Aigner lotions and potions as well as some nicer amenities. Food wise; I had ordered a gluten free meal but the flight attendants came around with normal meals and asked if I would prefer to have those instead. All the food was really good but their starter should be more creative, the only appetiser choice was smoked salmon and prawns on all flights. Cairo has a large number of transit passengers, and you clear security at the gate before boarding which makes it a very easy transfer. The newer lounge called Alioth which recently opened is very preferable to the older lounges, namely Almesian. My seatmate used the latter and he described it as a crowded mess. My lounge experience was pretty good but nowhere near the best. My favourite bit about flying Egyptair is that their arrival time into Heathrow is the least busy time of the day, at 1pm, and immigration was deserted. I had a pretty good experience with Egyptair and they have improved a lot since last year and I have easily taken notice. I might consider taking them again in the future if they upgrade the equipment on the Bangkok route.
1/10

"no information on my luggage"

Not Verified | In August 2019, Accra to Tokyo with a transit in Cairo only to arrive in Narita Tokyo with no luggage. I filed my missing luggage as soon as possible and received a mail indicating it will be worked on. That was the last I heard from the airline, I followed up with calls in Tokyo by myself and the concierge but never any response. There were hardly any attendants to even pick the call. I returned to Ghana still with no luggage or a credible response. I go to their office in Accra regularly only to be met with Empty desks. Their manager is barely in office and I still have no information on my luggage. It’s been almost 4 months now with no update or compensation. To think I was a business class ticket holder and experienced this mismanagement is appalling. I will never use this airline or recommend this airline to anyone. Very rude attendants in Cairo when I asked to follow up on the luggage during my transit.
21 to 30 of 375 Reviews