✅ Verified Review | Flew Dragonair from Hong Kong to Busan. Before landing in Busan, cabin crews started their checks, making sure if all the window blinds were open and all seats were in an upright position. At that time, I asked one of the male cabin crew to help me clear the meal box away, he shouted at me and instructed me to put the meal box into the seat pocket. Many passenger were looking at me which was embarrassing. I saw other flight attendants helping passengers clear their rubbish and the meal box.
10/10

"service was friendly and efficient"

✅ Verified Review | Hong Kong to Chiang Mai with Dragonair. Best flight imaginable. Service was friendly and efficient. Special meals were honored, and my low-lactose meal even had a piece of well-prepared fish. Amazing. The seats were fine too. If every airline offered the service provided by Dragonair on this flight, there would be a lot fewer air travel complaints. We loved this flight.
8/10

✅ Verified Review | Flew Hong Kong to Beijing. Good flight, while the two previous flights were cancelled due to the notorious 'traffic control' in Beijing. My flight departed on time and had a rare on the spot arrival. Service was good and the meal is good. Dragonair is part of Cathay Pacific but remain a separate operating entity, and in my opinion they are better than Cathay, and I always prefer them on this route. Business seat is of older configuration but does not matter for a short haul flight.
2/10

I will never fly Dragonair again. Our orginal flight from Shanghai to Hong Kong was delayed for over 7 hrs along with all other Hong Kong flights for Dragonair. Dragonair kept giving poor excuses like weather, air traffic control, aircraft scheduleing etc. After much fighting they finally offered a meal voucher. When asked about my connection flight that had been missed they advised me that Hong Kong would have all the details when I land. Guess what when I landed they had nothing. Landed just after 1am and had to fight to get a hotel voucher for a hotel 45 mins away. Got told that Dragonair would cover the cost of a transfers, breakfast, IDD call. Get back to airport at 9.30am for my new connecting flight to only fight again for reimbursement of taxis and meal voucher.
6/10

✅ Verified Review | Kolkata to Hong Kong with Dragonair. The flight was almost like a no-frills airline. Did not expect this from Cathay Pacific. No personal screens on seats, no drinks options, just a snack box. The seats were OK though. Lot of turbulence, especially just before landing at Hong Kong a big bump! No seat chargers. Cathay Pacific needs to improve its Dragonair flight services on international routes.
8/10

✅ Verified Review | Beijng to Hong Kong with Dragonair. Very smooth flight - on time, which is not easily expected for a flight from Beijing where there is always problems with traffic restrictions or weather. There is nothing to write home about for any economy flight as such but it is good that bottled water is provided at each seat (not provided by parent company Cathay Pacific) and hot items available at breakfast. Service is adequately good. It seems that Dragonair flights are preferred to Cathay and I hope now that the airline is renamed Cathay Dragon, the service standards will not change as I feel Dragonair is better - particularly for meals.
9/10

✅ Verified Review | Wonderful flight and fantastic cabin crew. We had just flown Cathay Pacific from Adelaide to Hong Kong and then on going to Beijing with Dragonair. Brilliant service, greeted with smiles from cabin crew. Very fast and caring about passenger safety, comfort and top quality service. Very good food such as beef or fish or duck and all food presented piping hot and tasty. Great value in a clean fresh and well looked after aircraft, well done Dragonair, we will fly again with you soon. 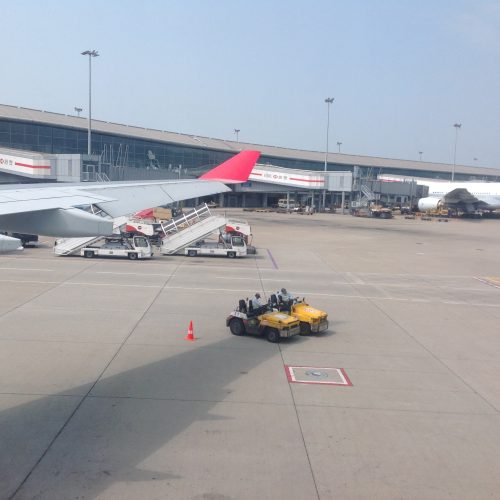 ✅ Verified Review | A good flight with Dragonair from Hong Kong to Tokyo, on time, and the arrival at Haneda is a good thing free from long queue and custom hussle usually experienced at Narita (will remember to choose Haneda flight if available). Good breakfast, hot items include rice dishes. Service is OK but no greeting to members (they skipped this god gesture). New flatbed seat but not very useful for shorthaul even it was an early morning flight. A satisfactory flight but nothing special.
3/10

✅ Verified Review | Flew Hong Kong to Kota Kinabalu. Dragonair used to have good service: good food and beverages and good service from crew members. I used to look forward to travelling with Dragonair but not anymore. Wine was not served during meal times and the welcome juice service has now been strangely abolished. Upon cruising altitude, meals were served immediately. Considering that the flight was not full and it is a 2.5 hour flight, welcome juice service could have been factored in. Crew members were young and highly inexperienced: impersonal and not friendly. They were there to perform a perfunctory duty and were rather robotic at times.
6/10

✅ Verified Review | Hong Kong to Shanghai. Flight was initially delayed from 1200 to 1340 but then we boarded around 1325 and sat on the aircraft not getting airborne until 1600. This was due to "bad weather" in Shanghai although probably more likely the usual chinese air force airspace delays along this route which I am given to understand are almost constant. I accept this is no fault of the airline. However it might have been better to let us sit in the terminal rather than on the aircraft for so long. They gave us our meals on the ground, these were good. The flight was good, friendly staff dealing with loud and frustrated passengers well and spoke good english. The seat was comfortable. Check in and ground staff were friendly and the aircraft was clean. Return flight to Hong Kong was cancelled. This again due to "bad weather"/chinese airspace. Problems with every airline so not Dragonair fault. However two queues to ticket desk (both massive) when we arrived, were for different things. No one told us which queue to stand in so we split up and stood one in each, eventually got a standby number, came back 2 hours later and was put on a new flight. This flight left very soon so were given priority security and baggage tags. Missed our connection in HKG but staff helped us get accommodation and a new flight in HKG. Staff at Shanghai were slow, didn't tell us which queue to be in or what was going on. However check in clerk was helpful. Again not Dragonair fault but could've been handled much better. 4 hours of queuing and then a sprint to security not fun. Flight itself was on A330, clean and had ife. Meals were good, so were crew, seats slightly dated but fine and aircraft clean. Would recommend Dragonair, they are a good airline and delays not their fault, just staff in Shanghai need more training at how to deal with this especially as it happens frequently. They are excellent though when it comes to reorganising in Hong Kong and as sister airline to Cathay Pacific make connections to them as seamless and worry free as possible. As you can make it all (international flight and domestic flight connecting) under one booking they will sort hotels and new flights if you miss connection so would recommend Dragonair especially if you are doing international flight followed by domestic flights within China.
11 to 20 of 174 Reviews