"took their masks off most of the flight"

✅ Trip Verified | I sent this complaint to the airlines on Tuesday, June 29, 2021. I requested a reply, which I haven't received. I only edited the review by eliminating the religious group to which the two passengers next to me belong. I was sitting on an aisle seat when two young men who I could tell from their attire are of a strict religious group, asked the young man across the aisle, without addressing me, if he and I could switch seats. Due to religious reasons, they wanted to have a man sit there. We both said no, because the man across the aisle was sitting with his wife and son. I suggest airlines screen their passengers better for religious preferences. Furthermore, these two young men took their masks off most of the flight. I told one of the flight attendants, and she told them to put them on, which they did until she left. A passenger behind us also told them to put them on to no avail. Flight attendants walked up and down the aisle and never told them to put their masks on. Personally, I wore two masks which I didn't take off the entire flight even to drink water. Since we had to circle off on the Atlantic due to thunderstorms in South Florida, I was uncomfortable and, of course, thirsty. I went to the lavatory once and noticed that other passengers who were not eating, also had their masks off.
1/10

Not Verified | This company for unaccompanied minor is the worst by far and yet they charge you 150 dollars for it. My daughter had a direct flight from Orange County Ca to Atl Ga and somehow got diverted to another airport and no one contacted me, I was sitting at the airport waiting for her when I got a call from her freaking out cause she landed in another airport and she doesn't know why and no one told me anything. After speaking to a manager in the airport from Delta, she told me that my daughter is fine and to calm down she will get there when she gets there and that the weather was so bad that they couldn't land but all the other planes seem to be landing just fine and there was no rain, no black clouds it was clear as day sun shinning and 95 out. But the weather was so bad they landed somewhere else and then didn't contact her mother ever even after they sat there for 3 hours. On top of that my daughter was on the phone crying and the flight attendant told her to stop crying and that she was fine and freaking out for no reason. Thank god there was a Mom sitting behind her with her kids who stuck up for her and reassured her that it was going to be ok and that she was there if she needed anything. We fly with southwest and pay 50 dollar unaccompanied minor fee and have never had an issue they tell us if they are running late or even when she has had a not direct flight and they land and change planes the flight attendant will text you and let you know all is well. I have contacted them but I just do not want another child and parent to go through this don't fly your unaccompanied minor with Delta.
2/10

Not Verified | Hopefully you book everything perfectly and never need to speak to a person. We were clicking around trying to find the best flights, and thought we had. Turns out once we clicked back, the dates changed and so did the traveler names (my wife was booking for me and my boys and ended up booking for herself and the boys, and the dates changed by a month!). Tried to call Delta and the hold time was 9 hours! Tried the chat and couldn't get a live person. Ended up missing our 24 hours free cancellation window and had to pay $50 to change my name, but they forgot to change the dates. Now another 9 hours on hold to update to the correct date. We also tried changing to an earlier flight on our last Delta trip, by changing flights took longer than the flight itself.
1/10

"pull your mask up between bites of food"

✅ Trip Verified | They expect you to pull your mask up between bites of food while you're chewing and remind you constantly. One flight attendant in particular was wiping his sweat on his gloved hand and touching everyone's cups and ice, etc, yet my husband's mask fell down for a split second while he was talking and the guy instantly yells "pull it up, over your mouth and nose" as he was pulling it back up. He also stood over my 21 and 23 year old daughters while they were eating to make sure they were pulling it up between bites. Every few minutes they come across the loudspeaker reminding you to keep it up no matter what even in between bites or you will be removed from the plane. We are adults, we know the rules and we don't need a constant announcement disrupting us throughout the flight and airline staff using intimidation tactics while practicing disgusting and unsanitary behaviors themselves.
2/10

✅ Trip Verified | At the right gate. No information about riding a bus 50 before departure. That was not the case when leaving Slc to Seattle. Missed the flight because of the extra time for boarding added on that was not disclosed. Also the announcements are really hard to understand. Talk as fast as you can with mush in your mouth is the norm. Plus echoing makes it hard to hear announcements Let's upgrade the speaker system. They got us on another flight and it was much appreciated. Lost four hours of life waiting. However, agent never bothered to tell us second flight moved to a different gate and this change was not on the ticket he printed. Luckily we asked another agent. Had to book it to the other side of the Seattle Airport to make it to Medford.
1/10

"avoid flying Delta in the future"

✅ Trip Verified | I will avoid flying Delta in the future at all costs. I was on hold- the first time for 4.5 hours and I finally had to hang up. The second time for 2.5 hours. At the airport, there was a very long line for international and domestic travel, and Delta had one person behind the counter for international travel. We waited in line for two plus hours. Hard to believe SW does it so well and Delta so bad. You need a new management team. I would be embarrassed to work here.
2/10

✅ Trip Verified | We sat at the gate for over a hour after we landed to get off the plane. I’ve flown several flights, and this has never happen and I don’t like how we all were treated on the plane. Very poorly, never would recommend and never will fly Delta again.
1/10

✅ Trip Verified | They just diverted a flight from SLC to Boise Idaho because of failure to properly fuel and make a flight plan. Currently sitting in the plane on the Boise tarmac waiting to be brought BACK to salt lake. Folks are needing to get off here, missing checked bags, no more food on board. Terrible preparation and flight planning. Probably revoking my work travel willingness based on this incredibly poor experience. Extra hour and a half total added to the travel at 11pm with an extremely vague explanation. 0/10 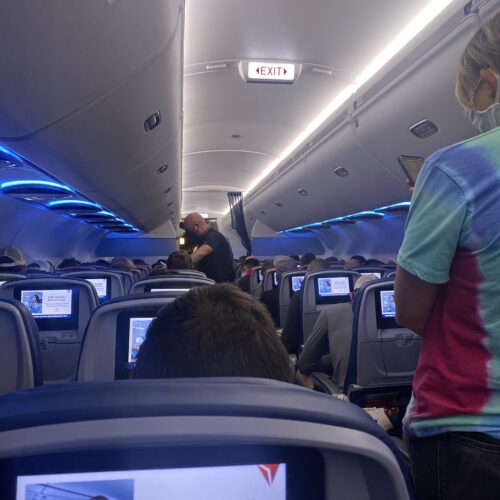 ✅ Trip Verified | What a mistake! I usually travel to TLV almost every year for last three decades via El Al. Being a new American Express Platinum member, I was encouraged (points-wise) to go by Delta. Turns out: Awful Choice! It started bad, on the the plane for several hours at LAX waiting for take off, while they fixed the problem of "a door not closing". By the time I got to JHK late that night, I had of course missed my connecting flight to TLV. We were given vouchers "for the hotel". Us four stranded parties went to that Airport Holiday Inn, only to find when we got there that the vouchers were not for the room - as the typical credit card number was not on it. Turns out, we were mislead as these were only to get a rate. One of the parties had to sleep in the lobby because there was in fact no room. Further, because of this passage of time, we has to retake the COVID-test ($225) the next day on top of paying the hotel ($150) and lose a day in travel. When I went to be reimbursed, the airline (the "we care team" - which I prefer to think of as "We could not care less team") declined to do so, saying a passenger had caused the door problem and therefore they could evoke an act of god "Force Majeure" exemption not to compensate - a first in all my travels! (Great lawyers they have, apparently) Next time El-Al!
2/10

"I will never fly Delta again"

Not Verified | Absolute worst. Tried to upgrade seat and told that the ticket we bought was non refundable and not available to upgrade at any cost. This is the absolute worst policy ever. I was willing to spend good money to upgrade at the gate and was told we couldn't. This information was also never presented or buried so deep in the fine print that no one reads. I will never fly Delta again.
1 to 10 of 2036 Reviews