✅ Trip Verified | Had a single ticket issued by KLM from Prague to Moscow via Amsterdam. I have SkyTeam Elite Plus status. Flight from Prague has been codeshare with CSA but operated by Smartwings. Much to my surprise, CSA rejected to check my luggage through to the final destination, saying that they do not have the respective arrangement with KLM. Both companies are SkyTeam members and my flight has been presented as KLM flight. Consequently, I have been forced to pick up my luggage in Amsterdam, leave the terminal, check-in again, pass security and passport control. Rather than having my planned meeting in Amsterdam, I had to deal with my luggage. I was checking with KLM and they confirmed, that there is indeed no agreement between these two companies and CSA is right. And it is despite the fact, that flight has been marketed and sold as KLM flight. Another problem is, that you purchase a ticket with 4-star airlines to end up with poor quality 2-star low-cost, which does not even let you choose your seat for free (despite my Elite Plus status). Therefore, be aware of the codeshare. You might be paying for one service and get something very different.
2/10

✅ Trip Verified | Paris CDG to Prague. Late In both directions. No warning, no one says anything, the plane was already supposed to have left when they started boarding. No apologies no explanations. No refreshments unless you pay for them. Lame experience overall.
1/10

"Avoid if you can"

✅ Trip Verified |  Prague to Gatwick. I will strongly recommend not to use this airline, I went with them to Prague and back. Going in to Prague they told me there is not enough space for me to fly as they oversold the tickets and they lost several passengers bags. Luckily someone didn’t show up so I could fly. I have paid and booked the flight weeks before. On the way back flight was delayed, no explanation to what why etc, I have lost my connection home and staff said “it’s a shame” no sorry etc. Avoid if you can.
1/10

✅ Trip Verified | Flying OK619 from Amsterdam to Prague on October 3rd. Flight operated by Smartwings and late as usual. Boarding has been chaotic, service a board amateurish. Passengers were siting for quite a long time in the plane after "boarding completed" without a word of explanation as to why and what might be the departure time. The same in Prague. The plane was sitting on the apron, passengers waiting and no explanation provided. Would that be that difficult to explain, that we are waiting for the bus? Very poor service. One feels as a cargo. Plus you have CSA ticket but flight is actually operated by Smartwings which is a low end lowcoster. Real disappointment, nothing was working right.
10/10

"the crew very professional and friendly"

✅ Trip Verified | The flight was operated by Smart Wings and it was a surprisingly good experience. I have not flown Czech Airlines for many years and now, after booking the flight and after reading the reviews, I got really scared. But it was a very pleasant surprise. I booked the economy flex ticket, so I got a little ciabatta, water, coffee and a biscuit. Additionally I bought a beer on board (some 2,5 EUR). I got an emergency exit seat which was another nice suprise. The flight was on time, the crew very professional and friendly (water offered to everyone, several times during the flight checked if anyone needs anything). Overall a very good experience. After flying for many years only with Lufthansa group, I would not say that Czech Airlines are worse. Even on the way to St. Petersburg, my experience was pretty much the same. The only difference was that I did not get the emergency exit seats and I have to say that the legroom in the normal seats is very limited.
5/10

"the plane was a bit dated"

✅ Trip Verified | Barcelona to Prague with CSA Czech Airlines. The flight went smoothly, with a lot of information provided at all times. However, there is very little room between rows and the plane was a bit dated.
2/10

✅ Trip Verified | Amsterdam to Prague. Took my cabin luggage. Was plenty of room in the cabin still. Very annoying. Not enough leg space for 190cm person, which is not tall in. My friend who is over 200cm had it even worse. 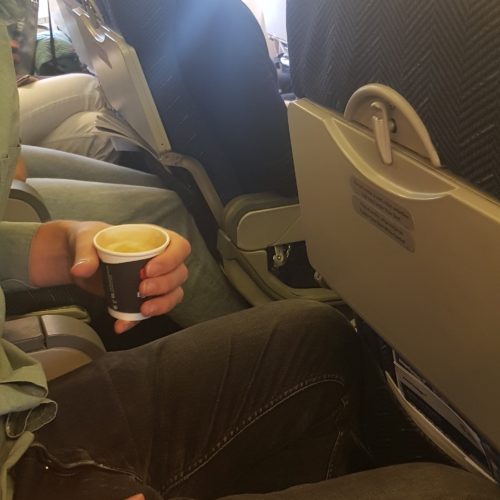 ✅ Trip Verified | Moscow to Prague. This was a very poor experience. Initially, I changed my ticket after buying one with baggage extra. Then I changed the date. The system did not took my baggage, although I emailed the company twice and they assured me this was ok. I had to pay again for the baggage. The departure was delayed from 5:05 to 5:45 to 6:30 and still counting. Missing first night events in Prague due to this flight. A horrible experience.
1/10

"not really an on-line check-in"

✅ Trip Verified | Copenhagen to Prague. The airline is offering on-line check-in which is not really an on-line check-in as you have to get your ticket at the baggage counter. This is a big step back as I have travelled a couple of times with this airlines the same route (Copenhagen to Prague) and before August it was possible to save your ticket to your phone wallet or print it at home. Moreover, the staff is rude and always has troubles with some people's cabin baggage even though the cabin storage room is completely empty.
11 to 20 of 224 Reviews