"basic standard service with no frills"

✅ Verified Review | Croatia Airlines is a small regional European airline based in Zagreb. I flew from Zagreb to Zurich to connect with my Swiss Airlines flight back to Singapore. The aircraft was a turboprop Dash-8. For the 1 hour flight to Zurich, flight attendants came around to serve crackers and beverages. Overall, the flight was more or less similar to other European airlines flying intra-European routes - basic standard service with no frills.
8/10

✅ Verified Review | Copenhagen to Pula via Zagreb. Croatia Airlines is a nice airline that I've flown many times when visiting relatives in Croatia. The crew is cheerful and friendly, and even if it was some time ago they served a cold meal the snacks they serve are ok for the short flights they offer. The age is however starting to show on the aircraft but still OK. I still recommend Croatia Airlines, mainly for the crew. The cake and sparkling wine available for purchase for someones birthday and special occasions is great. 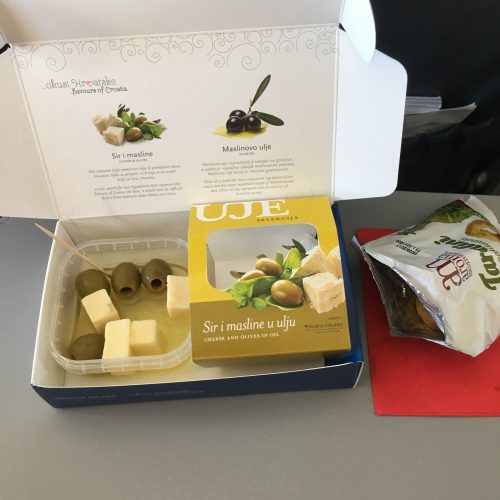 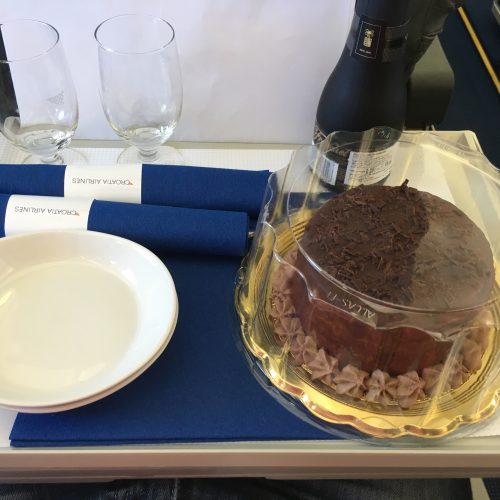 "generous with the free drinks"

✅ Verified Review | Flew London Heathrow to Zagreb with Croatia Airlines. The flight was delayed due to late arrival of the plane at Heathrow. However, their boarding process was quite efficient. The ground staff were well organized. The plane seemed to be showing its age but still clean enough. It was a 2 hour flight so no meal, they had only snacks but the olives and cheese were pretty good. They were also generous with the free drinks. Zagreb is small airport so we had to use bus to reach the arrival gates. It was good value for the money.
10/10

Croatia Airlines is a good middle-sized airline. I was flying from Heathrow to Zadar via Zagreb, slight delay because of heavy rain. The gate was directly across main departure hall, which is an excellent position. Flight was smooth, staff were friendly and polite. Catering was so so, but nothing worse or better than any other airlines. I had a transfer in Zagreb but the time between the two flights was more than 5 hours so I decided to take my baggage and to check-in for second flight. Check in lady was rude, but that's up to the airport, not the airline. Second flight was delayed, but we were notified on time so I had checked in later anyway. Flight was short (40 min), only drink service with cookies. Overall experience: Good airline with new aircraft with comfortable seats and excellent staff.
4/10

Zagreb to Sarajevo with Croatia Airlines. A short flight, catering on board was less than poor with just water and crackers. If you want juices you have to purchase them. The ticket for 50 min flight was extremely expensive, 130€ one way
10/10

Rome to Split return with Croatia Airlines. Both flights in October 2015. Flight out of Rome was delayed for about 45-mins. As I don't speak Italian I had no idea why. On both flights the cabin crew worked hard to serve pretzels and juice. Really not needed for a 55-min flight! On the return we must have been ahead of time because we seemed to fly across Italy diagonally - beautiful views. Then we appeared to take a fairly low level tour up the west coast with houses and beaches right below us, before turning into Rome. A very pleasant flight.
1/10

"check in was rude, unhelpful"

The Croatia Airlines staff during check in was rude, unhelpful, and refused, without explanation to print out the boarding passes for each part of the flight. Forcing us to run around trying to get boarding passes before boarding actually starts. Overall, experience with staff at the check in left me under impression that I'm unavoidable annoyance to the lady who was checking me in. Very unpleasant experience. Flight itself was average, typical boring flight.
3/10

Not happy. Have just paid 75 € for excess baggage. I believe the costs are too high in comparison to BA and many other credible airline companies. Croatia Airlines failed to offer a possibility of paying excess baggage online and reduce the costs, did not offer a possibility of upgrading into a higher flying class to avoid the charges. Additionally, they do not offer online check in and they could only issue me two boarding passes while I have to get the last one in Vienna to London, even though they're aware that there is a very limited amount of time between the two fights. I'll do my best to avoid Croatia Airlines in future.
7/10

30 min delay. Polite and attentive staff. It seems that generally flights of this airline that are scheduled for the afternoon, tend to be a bit delayed. Basic meal offered during this short flight, with an option to top it up with purchased food and drinks. Flight about 70% full. Generally smooth service and no particular problems.
21 to 30 of 81 Reviews