"enjoyed our experience with them"

✅ Verified Review | We flew Citilink yesterday from Jakarta Halim Airport to Semarang. Check-in was quick since we didn't bring any baggage. Aircraft turnaround was fast and we got onboard in no time. Take off a little late because traffic. We didn't buy any food and beverages onboard, but the price are reasonable. Landed on time. Overall we enjoyed our first experience with them. Consider to fly them again because the price is cheaper than Garuda. Bali to Jakarta. I and my family have a satisfied reservation for this trip. This is my first flight travelling by Citilink. When check in upon departure we handled by a warm ground staff. The flight itself departed on time. I found a nice cabin ambiance with a nice welcome greeting from the nice cabin staff. As a low-fare airline, there is no inflight free meals, but we can choose variety of hot meals from buy on board.
7/10

"choose for my next trip"

Jakarta to Palembang with Citilink and the flight was on time. Ground Crew was helpfull and nice, cabin crew also nice and helpfull. Citilink keep their cabin and airplane in clean condition, meals were not free but you can buy it onboard, a typical Low Cost airline. Overall was good for Indonesia low cost, maybe the best. I'd choose Citilink for my next trip.
5/10

Flight from Jakarta Halim Perdana Kusuma to Semarang. Booked this airline due to the airport being located in Jakarta city centre - Halim Perdana Kusuma Airport (HLP). Airline changed the departure time without notification, I realized the delay through the web check-in and asked their call centre to confirm it. The check-in process was chaotic as they only have two counters open for 5 different flights. The baggage handling was OK for low cost airlines. The cabin looks good and clean. The cabin crew were helpful and polite. I sat on the seat 31A, limited space and limited recline. The flight was good. For value of money and quality, I recommed to fly with this airlines for short flights (1-2 hours flight). 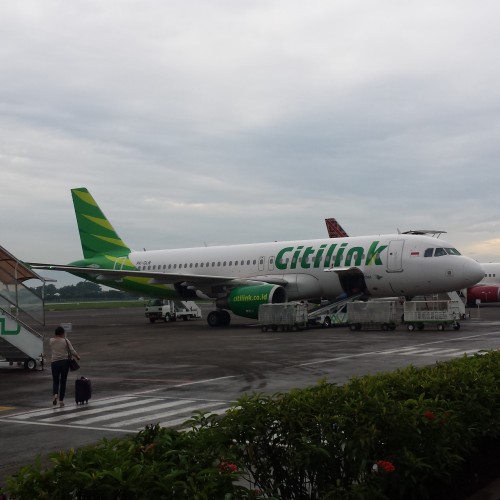 Flying Citilink from Surabaya to Bandung, I didn't expect much with this. The seat is very comfortable. The legroom is large enough for my legs. I could sit comfortably without adjusting my leg position. The cabin is totally clean and looked very neat. One more important thing is that the flight was on time.
8/10

I flew two routes with Citilink, Jakarta to Padang and Kualanamu to Jakarta in early October and was greatly pleased with the overall experience. The aircraft were in good condition, clean and airy, the flight attendants attentive, kind and professional in their demeanor. Most importantly the product gave the impression of well practiced routine and safety not an unimportant impression for nervous fliers. We were on time on both flights. The for purchase entrees were laughably cheap and in fact more than satisfactory ie. enak sekali! As an aside, their website proved to be the easiest one to navigate of the various Indonesian airlines, permitting trouble free purchase with a US based credit card. The fares were very competitive in fact in most of the routes I comparison shopped Citilink was the cheapest. But it certainly was not the cheapest in terms of product and experience. I do not see much difference with Garuda in terms of the quality, condition and state of the aircraft. Of course Garuda does provide snacks and meals included in the price of fare. I rank Citilink slightly above par with AirAsia and certainly much better than Lion Air. The only drawback vis-a-vis competitor airlines is that the Citilink route network is substantially smaller than Garuda or Lion, flying primarily between Jawa and Sumatera. Hopefully they can add flights to destinations in the Eastern part of the archipelago to give Garuda and Lion a run for their money. Very pleased and satisfied customer!
6/10

"rather a good experience"

It was rather a good experience of flying with Citilink from Jakarta to Makassar. Check-in went smoothly, ground staff was very polite. There was a bit of a mess with the departure gate as they changed it while the monitors were showing a different one. Nevertheless the plane took off on time and arrived on time. Service was ok, no free food but what was available was pretty cheap anyway. I can recommend this low-cost airline and will probably use their services again in the future. It was my first time flying with low cost carrier Citilink from Jakarta to Banjarmasin. The check-in process was quick as I checked in online thus we could proceed directly to the gate. Terminal 1 of CGK is rather chaotic area and it requires checking of document verification and boarding pass up to three times (twice by airport authority and once by ground staff prior to boarding). Flight experience was smooth, cabin crew were cheerful and energetic. They started selling selection of food and merchandise right after the seatbelt sign turned off. Attempted to buy coffee and sandwich but both items were not available during the flight. Seats are wide and legrooms are spacious enough for low cost carrier. For my height 168cm, should be no problem to be seated on regular seats. Not to mention that 20Kg allowance is included for my flight. Overall, Citilink offer competitive products in both service and aircraft which is new and well maintained!
6/10

We used Citilink to travel from Jakarta to Denpasar Bali. Check in was handled nicely. However it was a bit confusing since our boarding pass said we would have to proceed to have C1 whereas the TV screens indicated that our flight was leaving from C6 and the information staff at the gates didn't seem to know the gate either. Having eventually arrived at the right gate (C1), we were waiting for boarding which commenced on time. Boarding was done quickly and efficiently. The flight experience itself did not feature anything unexpected from an lcc. There was a selection of drinks and food available for a little money. In spite of the limited leg room, seats were comfortable. After arriving in Denpasar, we quickly received our luggage. Overall an ordinary lcc experience.
6/10

Citilink low cost airline flight from Jakarta to Denpasar. It was delayed 30 minutes and the flight to Denpsasar took about 1h 30 min. They didn't offer anything complimentary being a low cost airline, it is buy onboard.
41 to 50 of 50 Reviews