Not Verified | The flight experience was very pleasant. The online check-in process was simple. The flight attendants are all polite, hard-working, and well- mannered. The food is pretty good. It doesn’t have a large selection but the quality is good (the food is warm enough. the dinner roll is warm and soft). There’s fresh fruit and ice cream too. This is instrumental to a long flight (>14 hours) as you don’t want to feel stuffed but refreshed and hydrated. The flight is clean and seats feel very new (not sure if they did any renovation during the pandemic). The ground service of CX at the Logan airport is great. I need to take the second flight and basically had no ideas on what to do with my baggage. The ground service there told me where to go, where to claim my baggage and where to drop off and check in again. One improvement I would make is on the movie/TV selection.
1/10

"It has been a nightmare"

✅ Trip Verified | Paid extra for a good seat; Didn't get it due to weight balance but was promised refund the price difference before the flight; Wasted 10+ hours in nightmares with the Cathay Pacific customer service on whatsapp, emails, and phone calls, but it's still not resolved yet. I spent a few hundred dollars more on this 17 hour long trip, for a seat with good leg room and unobstructed view by the wing. However, I was told by the lady at the check-in counter that the seat had been changed by "the people in Hong Kong" for weight balance and she could do nothing about it. But she told me that the price difference can be refunded as long as I contact the customer service. And I believed her easily and thought that would be easy and not waste much of my time, because the fact that a paid service cannot be provided implies that that part of the cost should refunded. Or so I thought. The first customer service guy told me that it was impossible even before I could finish describing my situation. And he was also very ignorant of what services they are offering, and thought that one doesn't have to pay anything for extra leg room nowadays. I contacted again in emails, and the second person turned out to be a huge disappointment too. I was humiliated by a "goodwill gesture" of 10,000 Asia Miles that I will probably never use. And this guy even started to blame that it was their staff at JFK who changed my seat, which contradicted what I heard before the flight. And I am confused why that can be a good reason for not refunding me too, maybe by discrediting the check-in counter lady who told me that I could easily get a refund? After that I have spent more hours on emails and phone calls with their customer service. It has been a nightmare. More appointment and more humiliation. This is my first flight with Cathay Pacific, and I think the last one too. I don't know why it was a trustworthy airline in my impression, but not anymore. Regarding the inflight experience, I had a broken TV, a tiny unstable table with no beverage holder, and was in a location directly facing the toilet. I didn't sleep the night before the flight for better in-flight sleeps and jet lag, but I couldn't because the toilet flashed me every 5 minutes.
1/10

"horrendous when it comes to cancelling flights"

✅ Trip Verified | Cathay is a great airline if you get on the plane. They are absolutely horrendous when it comes to cancelling flights and being inflexible and unable to accommodate you on partner airlines. My flight in November 2022 was cancelled and the would not let me fly on a oneworld partner. Instead they wanted me to do a 3 day layover and arrive 3.5 days late to my destination. Which is not ideal when you booked a 3 day trip. Only when I pointed out to them that I was arriving after my return flight left did they say "oh maybe we need to rebook the return too then". Ridiculous. There are tons of oneworld partner flights that would get me there on time but they refused to accommodate me on any of them.
2/10

Not Verified | London to Auckland via Hong Kong. I am travelling to Auckland from LHR next February, 2 pax business class. Not cheap! Given the choice of two 5-star airlines I opted for Cathay Pacific over Singapore Airlines, a decision I’m quickly coming to regret. Just over 6 months before I’m due to fly, I receive an email cancelling our flights from LHR-HKG and from HKG-AKL. I have been offered replacement flights with the second leg now on an alternative 4-star airline and, to compound matters, a 10h 40m layover in HKG. Totally unacceptable in my view. What’s more, you should try getting in touch with the airline to discuss the matter. The phone number just puts you on hold and the chat function tries to be smart but is worse than useless. I had really high hopes for a great flying experience but these hopes have been dented significantly.
9/10

✅ Trip Verified | A pleasant flight. I traveled with them on the Airbus A330-300 from Chengdu to Hong Kong. A great flight, and excellent service in the air and on the ground, I have never been disappointed in Cathay Pacific. 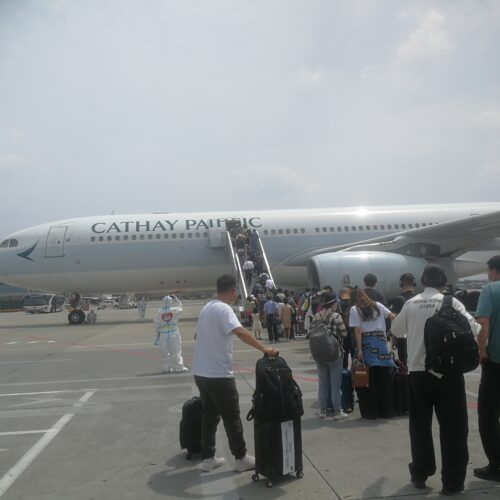 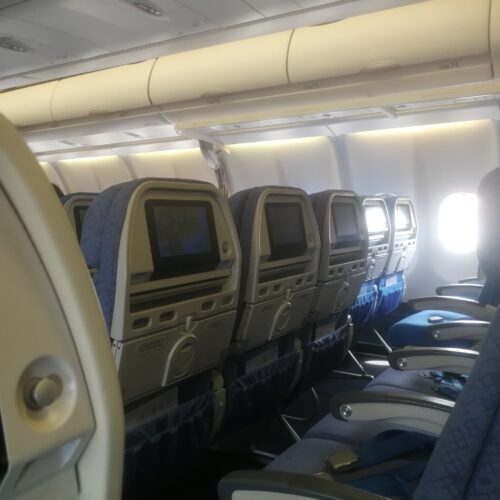 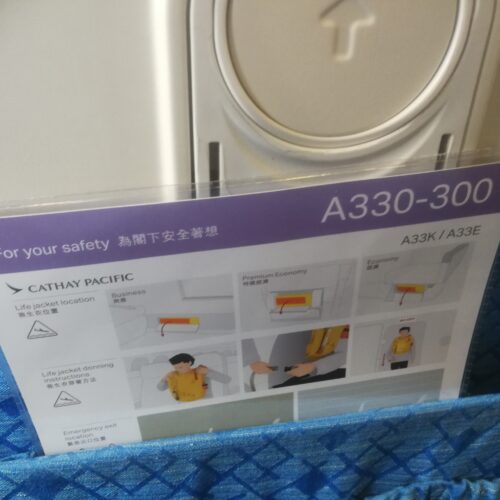 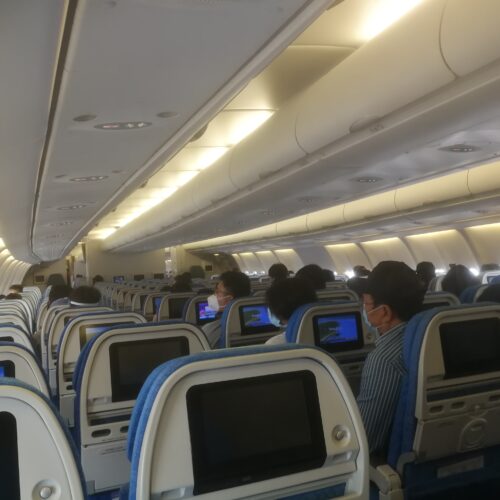 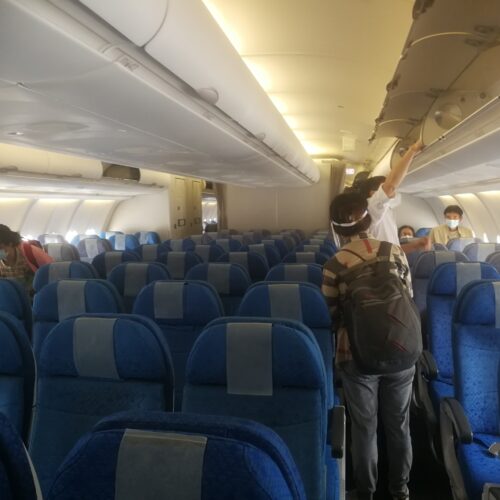 ✅ Trip Verified | All my flights from Canada to Vietnam were canceled a month or two before my trip so I called them to reschedule the flights. It took them forever to confirm my new flights and send me a new itinerary. I had to call them again 1-2 weeks before the trip to ask for an update and even then, not all of reservations were confirmed. My flight from Saskatoon to Vancouver apparently needed an update from the Hong Kong team who needed to connect with Air Canada. That again took extremely long. I had to call them almost every single day to ask about the flight just to get the same response of "Don't worry, you are assured to get on the flight" or "We still need to her back from the Hong Kong Team" or "We will call you as soon as we have any update". Up until 3 days before the trip, I did not receive a single call or email regarding the issue. On that day, I had to call them constantly for 5 hours, talking to numerous agents without being to make any progress. And, at the last minute, they informed me that the flight was no longer in their system. Apparently, Air Canada decided to prioritize their passengers and I couldn't get on the flight anymore despite having requested it months ago. This miscommunication between airlines COST ME $600 to book myself a last-minute flight with another airline (Westjet) from Saskatoon to Vancouver to catch other flights. That was the cheapest ticket I could find which unfortunately left a day early than my planned trip. So I had to stay at the Vancouver airport more than 24 hours. And since it was too sudden, I could not make any hotel reservations and had to sleep on a wooden bench in a food court where people talked throughout the night. Also, due to the small number of Cathay Pacific flights from Vancouver to anywhere else, there was not a single agent I could talk to in person. I couldn't even check in my luggage early and had to sleep with two 23-kg boxes and 2 extra carry ons. I was extremely disappointed with Cathay Pacific. Initially, I thought their customer service was good as they were nice and tried to book new flights for me when I requested. But, their inability to communicate with other airlines or even among their teams slowed everything to an extreme. To make it even worse, their refund/compensation policy makes no sense. They couldn't fly me out to Vancouver but they reused to give me a refund for that particular flight. They told me that if I wanted a refund, I would need to cancel the trip for a complete refund. Now, I don't know who I talk to about this issue to demand a fair explanation and compensation. I already filed a complaint but looking at how terrible their communication is, I don't think I would even hear back from them.
1/10

"This airline is completely irresponsible"

✅ Trip Verified | I've had a terrible experience with Cathay. Our flight was from Phuket to Hong Kong and from there to JFK-NY. 2 weeks before our flight, Cathay cancelled the first leg of the flight without any reason. They did not provide any alternative solution and no rebooking options. I had to work with my travel agent on my own and find a flight on my own. After 5 days of discussions with them, I managed to get us rebooked for the first leg of the flight. 12 hours (!) before our departure I received an email from Cathay mentioning that they cancelled the second leg of the flight. Again no explanation given, no support, not even mentioning anything about refunding us. I was trying to contact them but it was impossible. I booked a new flight on my own and had to pay out of my pocket. This airline is completely irresponsible and not to be trusted. This was the last time I booked a flight with them and will never do so again. I also requested a refund for the seat that I had purchased on the cancelled flight and their response was that my refund is ineligible!
1/10

"Do not trust Cathay Pacific"

Not Verified | The flights that I booked for my daughter and fiancé were great, they got to the UK fine. Two days later they cancelled the flight from Hong Kong to Sydney. No explanation no alternative just cancelled, but not the flight from Heathrow to Hong Kong. So they get to Hong Kong and are left there. No communication, no assistance, just left. I have now paid for their return on a reliable airline. Do not trust Cathay Pacific.
1/10

"disappointed me a few times already"

✅ Trip Verified | Cathay cancelled my mom’s flight and I have been calling them everyday for more than a week now and has been promised something a lot of times, but nothing. I have been very patient with each call. I’ve ask for a supervisor on the 3rd call and they promised they’ll call me back in 2 hours, Final call I was promised to get a confirmation email of approval in 24 hours, 3 days later, no emails, nothing! They have to get an approval to replace a shorter flight they canceled even if the replacement was way longer for a Senior. Now calling again for the approval because the flight is in 2 days and the replacement flight they offered is denied. I have to buy another flight for my mom and cancel part of the flight. Cathay disappointed me a few times already. Enough is enough.
9/10

"told a refund will be processed"

✅ Trip Verified | In November, an air travel bubble was supposed to open between Hong Kong and Singapore. I booked a flight for the 24th, was so excited as I have not been flying since March! Unfortunately, just a day before its opening, due to the worsening 4th wave in Hong Kong, they had to postpone the travel bubble until further notice next year. CX acted in a very timely and professional manner, stating clearly all the options, such as flight credits or full refund. I rang their number, and a friendly attendant answered my call in no time. I was told a refund will be processed in a few weeks time. I look forward to flying with them again in the near future.
1 to 10 of 1350 Reviews