"had a good trip with them"

✅ Trip Verified | Cathay Dragon does the only direct flights to Penang from Hong Kong, which is code shared with MH. 2 flights a day using the older A330, but with updated interior and AVOD system. Boarding in Hong Kong is orderly, service is friendly and warm, majority of the crew are ladies. Catering however, is a little below average due to severe cost cutting, portion is very small and taste is bland. For some reasons, catering on the return sector, prepared by Malaysian kitchen tasted slightly better. Seats are ok, 2-4-2 is 8 across, giving slightly more room, it's rare nowadays. Cathay Dragon and Cathay Pacific now shares the same AVOD system, which means there are plenty of choices for films and music etc. My Sapphire status earned me a visit to the newly renovated Cathay Pacific lounge in Penang, this is a very nice lounge, compare to the other Plaza premium lounge. My bags arrived quickly on both legs, all in all I had a good trip with them.
6/10

Not Verified | Kuala Lumpur to Hong Kong. These planes are really old. not the first time taking Cathay Dragon flight from KL to Cathay, but discovered that most of the A330 are more than 20 years old, most probably these planes are passing on from Cathay Pacific. Food was just so so, no wine or blanket was offered. The cabin service is fine, no complain. I just wish Cathay Dragon should consider getting new planes to operate.
10/10

✅ Trip Verified | Kuala Lumpur to Hong Kong. Great journey. The captain finished my fight log sincerely and the cabin crew offered me some nice goodies, including chocolate for C class passengers. Email that the flight would delay was delivered to us half a day in advance, what a good assistance! 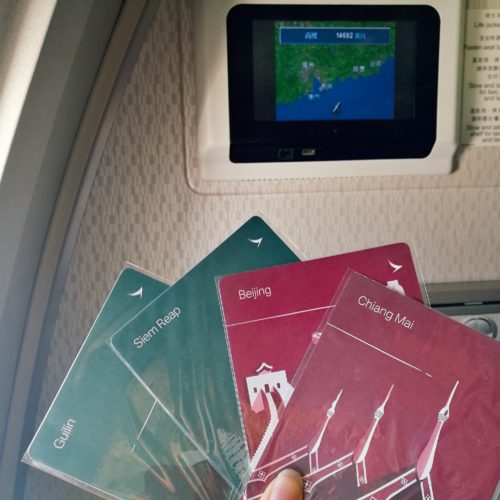 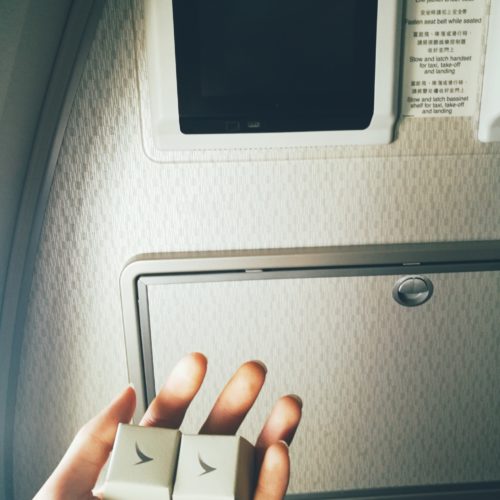 ✅ Trip Verified | I've been flying Cathay Dragon for decades now (i.e. even when they were their own airline as Dragonair). They are seen as a regional carrier, and it is definitely reflected in the choice of aircraft, and the significantly less elaborate in-flight service, despite similar prices to Cathay Pacific whenever both airlines fly the same route. On my flight to Siem Reap, I was pleasantly surprised to see a significant increase in proper jet bridge boarding whenever airports offered this - a welcome change to airstairs, and it is nice that they have a "wifi" device IFE streaming service onboard, but like United, it annoyingly requires you to download their studio KA app, something you will have to do before boarding the plane. That being said, the selection of movies and shows onboard was decent. Seats are fine, but I found the seatback pocket somewhat crowded with their own materials (safety cards, in-flight magazines, etc.) to the point that it was difficult to fit anything inside of it. It made me think of other airlines and their shorthaul economy classes, and how they actually give a separate plastic compartment near the top of the seatback. Seeing as I haven't flown on the Cathay Dragon A320 for a while, I was pleased to see the new seats, and the fully refurbished cabins, which made the decade-old planes look new and clean, though I'd also note that the seats are narrower than they were during the Dragonair era. Food onboard is fine, but beverage service is lacking, with only coffee, tea and water as their only options - the coffee infuriatingly was bland and plasticky - it made me wonder if Cathay- one of the world's top airlines could do what most airlines have already been doing and partner up with a decent coffee chain - to name a few examples, United has Illy's, Alaska has Seattle's Best. I will continue to fly Cathay Dragon, because it's a very stable airline and one that I can count on to get me where I need to be in a timely fashion. That being said, their regional project needs work. US carriers have been catching up quite quickly, and while they'll never compete with Cathay Dragon for their routes, it likely unnerves Cathay that their cabin service is now comparable to that of North American carriers.
9/10

"the catering was nice"

✅ Trip Verified | Hong Kong to Kuala Lumpur. Felt a bit uneasy due to the late arrival of transit passengers, without IFE functioning. But the catering was nice especially the cookies. After handing out my flight log, the cabin crews designated the two pages well plus offering me some goodies to complete my journey to the best.
10/10

✅ Trip Verified | Shanghai to Hong Kong. Nice catering with my favorite ice cream. The service provided by cabin crew were splendid. After knowing my Mainland Chinese identity, they would like to speak Mandarin, even if a bit hard for them.
7/10

"I was very impressed"

✅ Trip Verified | Chiang Mai to Hong Kong. This was the first time choosing this company and it was just great. Everything was efficient since I entered the airport. Staff was warm welcoming and helpful. The seat was not the best but still comfy enough. Food was great bearing in mind it was a short haul. Nice presentation of the food. On the way from Hong Kong our plane broke so we had to wait for another one. However the staff took care of us very efficiently. I was very impressed and will fly with them again if possible.
9/10

✅ Trip Verified | The flight from Hong Kong to Taipei was eventually operated by Cathay Pacific plane and staff, though it used to be a Cathay Dragon flight. They used long haul business cabin to operate the flight, with flat bed and fancy entertainment system. Hot dinner was served in the ultra short flight, with dessert and also appetiser. The crew was exceptionally efficient. However, the boarding was quite confusing.
8/10

✅ Trip Verified | Aircraft appeared to be very new. On time boarding through jet bridge but take off delayed by over 30 minutes because of technical faults. Cockpit crew kept passengers informed. Business class cabin consists of 8 seats in 2 rows of 2 x2 configuration. Standard business class seat with good recline and extended foot rest. iPad provided which had a smaller collection of items than on offer at Cathay Pacific. An amenities kit similar to Cathay Pacific was provided. Smooth flight. Quiet cabin. Only five of 8 seats taken. Attentive flight attendant. Announcements made in Bangla in deference to the destination and the flying clientele - nice thoughtful touch that truly made you feel you were going home! A menu card listing three entree choices was provided. It was a tasty meal accompanied by a choice of wines. The dishes had a noticeable Indian slant. I enjoyed my vegetarian choice. The dessert was a small tub of Haagen Daaz ice cream - something that has not changed in six years. The ice cream is usually rock solid; flight attendant cheerfully thawed it on request! It was a quiet, flight late late at night. Duty free shopping is available and I was able to get a few items I wanted. Landing cards were provided. The lavatory was clean throughout. Being in the forward cabin, we were the first to disembark. Although 30 minutes late because of delayed departure, I give this flying experience very high marks. 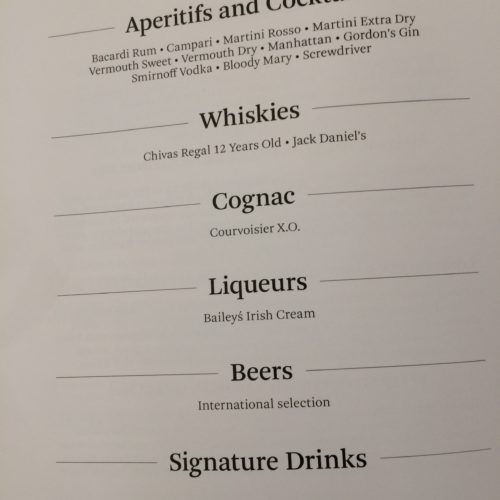 ✅ Trip Verified | This is the 2nd leg of my journey in November 2017 having arrived from Seoul. I had to re check in again despite that previous flight was on Cathay Pacific CX415. Hong Kong to Kota Kinabalu on A320-200 vin a 2 class layout cabin, the seat has been refurbished with the thinner seat. The new seat are not equipped with personal IFE- IFE is only possible by downloading KA studio into mobile device. Hot meal and beverages were provided. The standard of the in flight catering is fine though there are still room for improvement. Based on my flying experience with Cathay Dragon, the portion of the meal tray has been reduced. 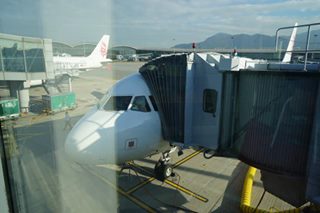 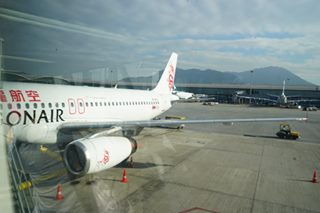 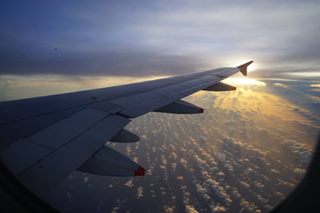 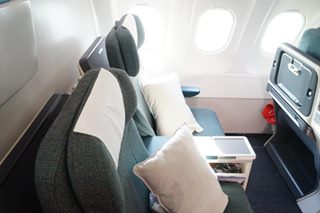 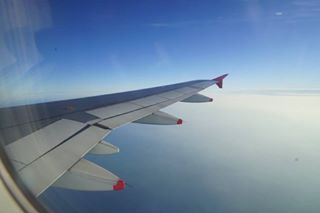