✅ Trip Verified | Wanted to leave this review for two major reasons: 1) The reviews I read about the company were quite outdated and was not sure what to expect and 2) The number of bad reviews created a wrong source of expectation prior to my flights. My flight was a return one to Havana, Cuba (about 45-50 mins flying time). Even though the feedback for Bahamas Air was quite negative, I must say that it was much better than with other companies I`ve flown (WizzAir, Ryanair). The only negative thing was that the flight was delayed about 40 mins in each direction which is not something uncommon with flights generally. The staff were very friendly and for such a short fly they also served some snacks. I must outline that the crew even went the extra mile since they don`t offer hot beverages on-board but were kind enough to find some for us. There was plenty of seats since the flight was half full. I didn`t experience anything mentioned in the previous reviews like bad customer service, safety hazards during the flight, lost or delayed luggage. If this was something that might have been the case in the past, seems that the airline significantly improved.
9/10

"The crew were very friendly"

✅ Trip Verified | A short pleasant flight from Nassau to Havana. Bahamasair is a typical holiday destination airline. The crew were very friendly, aircraft relatively new. Complimentary snack during this short flight was a nice surprise. Even for the economy class, there was enough legroom even for bigger passengers. Check in very easy and friendly. Will definitely fly with this airline again.
1/10

✅ Trip Verified | Freeport to Fort Lauderdale. Beware of travel delays and counter staff that need customer care training! My wife and I are veteran travelers and understand airlines are not always on time. In such situations, we expect timely information from staff about the rescheduling of departure. On Dec 16th the staff did not provide timely information and were extremely discourteous to passenger when they approached the counter. We made the effort to help a passenger in which English was his second language and he had an important connection to make. We heard the staff berating him so we decided to help him and learn more about is connections. Thus, we became the next individual to be insulted and berated because it was said it is the fault of the young man because did not book 3 hours between connections. We were leaving two hour late. We listened to other passengers from Freeport familiar with Bahamasair they reported it was common place for the airline to be late. Understand late is not problem, it is the courtesy with which the staff in addressing the connection concern of passenger affected by delays.
10/10

✅ Verified Review | Great customer service from Bahamasair. Departed Nassau to Fort Lauderdale before scheduled time. Very professional. Check in was a breeze. Quick baggage arrival in FLL. Continue to do well. The aircraft was clean. The pilot did a excellent job in take off and landing. We arrived early which was great because I had to be at work same day 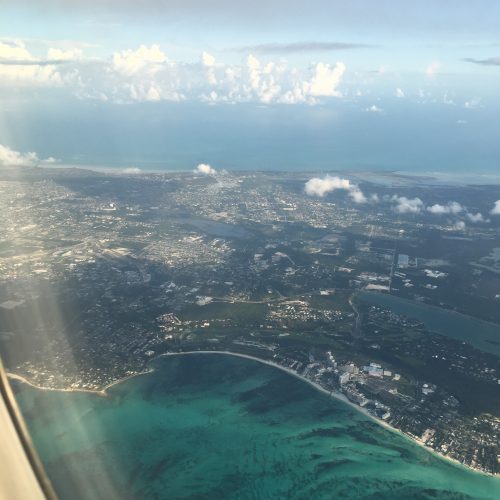 ✅ Verified Review | I was trying to fly from Freeport Bahamas to Deadmans Cay via Nassau. I was on the 0730 flight out of Freeport to Nassau then the 1400 flight to Deadmans Cay. The plane in freeport was delayed till 0930 am which was fine because I wouldn't miss my next flight. So we arrived in Nassau to find the flight to Deadmans Cay was delayed till 3.30 pm. This was normal for Bahamasair. But here is were I started to get upset - 330pm arrives so they walk everyone out to the plane. There, some problem so they walk everyone back into the building. They call us again sometime around 4pm and board the plane. They then explain to everyone that the plane doesn't have the paperwork ready and we wait on the plane anther 30 min till it arrives. So after the 3 hr delay were on the way. The pilot rides around the airport for seems like an hour, only to tell us they don't have light to be able to fly. After being messed around all day I figure Bahamasair would try to make everything right. But Bahamasair now tells me it isn't their falt and I am on my own.
1/10

On a 35 minute flight from Miami to Nassau we had an hour delay on the way in and 3.5 hours delay on the way back. No explanation was provided at all. Company did not even provide bottled water for the longest delay despite the fact that all the shops in the airport at Nassau shut down at 6pm and there was nowhere to buy even water. Service was awful too with moody and bad attitude stewardesses. For a premium flight of over $300 for a 35 minutes flight, the experience is definitely not deserved.
8/10

Nassau to Providenciales with Bahamasair. Amazing Service. Smiling and friendly crew. We flew on Bahamasair to come back home after a Christmas holiday. The flight was delayed a bit due but other than that it was great. The flight was 1 hour and 25 minutes. While airborne the flight attendant came around offering water, tea and coffee. I love to fly with Bahamasair.
1/10

"customer service do not give updates"

Freeport to Nassau with Bahamasair. Initial flight from Nassau was delayed by 3 hours from 6:30 pm to 9:30pm and the returning flight was scheduled at 6:45pm and at 10:15pm I am still in the terminal. Customer service representatives do not even give updates and the airline does not seem able to stick to basic principles of time.
2/10

✅ Verified Review | Just as most of the other reviewers stated, Bahamasair is just so lacking in professionalism. But there is not much competition, so they continue to perform without caring. We sat in Marsh Harbor this past Sunday for seven hours waiting for our flight to West Palm Beach to show up. No explanation and no help from the airline employees. (To be fair, they did give us an $8 voucher to be used at the airport café.) Of course we missed our flight out of West Palm to Boston - no help given to us for the inconvenience. Just so frustrating especially when checking in to the Holiday Inn West Palm to find other airline's 'distressed passengers' with credit vouchers to be used for food/hotel/expenses. Also, our flight to Marsh Harbor was delayed, but only by one hour - which I think is great for Bahamasair - hardly worth mentioning. We love the Bahamas but will have to avoid them in the future if Bahamasair is the only option.
8/10

"surprisingly had plenty of legroom"

✅ Verified Review | Flew Bahamasair round trip from Fort Lauderdale to Freeport on 03/22/2016 and 03/28/2016. Both inbound and outbound flights were on new ATR72-600. Slight delays (no more than 45 minutes) on each leg. This aircraft was very clean and surprisingly had plenty of legroom for a turboprop plane that seats 60 passengers. Other than on takeoff and landing, the cabin is very quiet once in the air. There was no need to use the Bose QC20 noise cancelling headphones. This is a rather short flight less than 1/2 hour.
21 to 30 of 53 Reviews