"did exactly what was said on the tin"

✅ Trip Verified | I flew Business class on the nifty 76 seat E170 jet out of London City routed to Dusseldorf. The cabin interior looked a bit tired inside, the jet being 10 years old and prior to this the aircraft served with other airlines. Whilst Eastern Airways won’t be in the league with the legacy carriers, I found the flight comfortable and the crew courteous and attentive. Overall no complaints with the fight, we were delayed outbound and the pilot made up some time en route. Eastern did exactly what was said on the tin and that was getting me from A to B as comfortably and safely as possible.
8/10

✅ Trip Verified | Due to my work I was required to travel to London, however as no airline offered cheap prices on such short notice, I decided to travel with BA CityFlyer from Rotterdam to London City. Traveling to Rotterdam The Haque Airport is pretty doable by public transport from Rotterdam Central Station or The Hague Central Station by bus and/or underground. Once arrived, I went straight to check-in my luggage which was fast and efficient as there was literally no queuing time. After passing the usual struggle at security I had a hour left before boarding starts. Due to work in progress on Rotterdam's terminal, there wasn't much to do (wifi was fast and constant though with lots of seating areas). Boarding was done in a nice and efficient way, however what do you expect of only boarding approximately thirty people? The cabin was comfortable. Plenty of legroom, leather seats and a good view in front of the wing, however I'd like to note that it would have been better if they actually replaced their magazine and safety card by a new one as the current one was in a very very poor state. Departed on time, it was a pretty short and straight leg with the pilot informing us several times with departure, arrival and weather information and 15 minutes into flight, the flight attendants served us a pretty limited service for British Airways terms (might had to do with a short flight of only 55 minutes), which included a drink of choice and a biscuit or chips. Once arrived with a not so smooth landing, the plane was quickly parked and deboarding started within a few minutes. Walk to customs (in peak, this is terrible) and baggage drop-off was just a few minutes. BA CityFlyer is an excellent airline providing you with plenty of legroom and friendly staff, however I still found it very pricey and catering could have been improved. 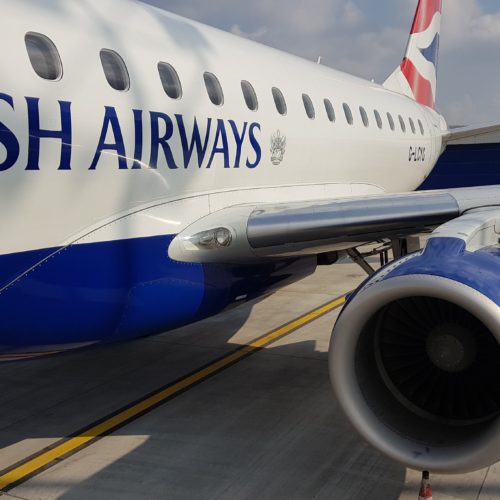 ✅ Trip Verified | Edinburgh to London City. BA CityFlyer still offers the sort of premium service you used to be able to expect of BA. As I was flying from Edinburgh I was able to access the excellent lounge at the airport thanks to my frequent flyer status (BA Gold). The lounge is spacious and has plenty of sockets to charge up your devices and desks in order to work. On-board the aircraft is configured 2-2 seating and the legroom is much better than the mainline BA flights into Heathrow and Gatwick. There's still complimentary catering in economy on flights to London City and this (for me) meant a beer and some crisps. I occasionally travel business class (Club Europe) on this route and the catering offered there is more substantial than that offered from Heathrow/Gatwick. All in all it's just a much better experience. Once landed it's less than 10 minutes from the aircraft door to the platform of the DLR. It's the best way to travel if you need to be in Edinburgh for a day of business. 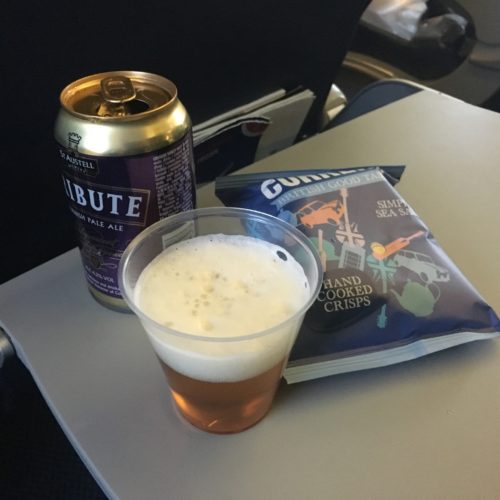 "is an excellent option"

✅ Trip Verified | Enjoyable and trouble-free travel on BA City Flyer. I've found that by making sure one has as much time as possible between flights for layovers this takes the stress out of flying these days with high aircraft utilisation the norm. I've noticed that so many complaints seem to be over problems caused by missed connections due to delays caused by air traffic issues or bad weather, or both. The Golden Rule is simple! - never trust the short transfer and connection times between flights listed on airline web sites or suggested by some travel agents - its just not worth the hassle these days, even if that means staying overnight at an airport hotel for your next flight, especially if that is long-haul or vv. Anyway, I allowed many hours between my flights through London City (a delightful little airport) and was also able to fit in a business meeting at the airport. BA City Flyer flights on the smaller EMB190 jet are excellent. Cabin crew were very attentive with my only complaint being that cheese dishes were all that were available - when are airlines going to realise many of us cannot east cheese (or chocolate) due to the subsequent increased risk of migraine attacks. My GP knows this and has for years, why don't the airlines? BA City Flyer is an excellent option and business class fares can often be 'cheap and chips'.
8/10

✅ Verified Review | Amsterdam to London City with BA CityFlyer on the Embraer E190SR. Check-in went well, however could have been quicker to drop of my baggage as two of the handling staff were apparently busy chatting with each other. Once at the gate, I chose to give my hand luggage to them to check into their hold as aircraft was full and as compensation, I was told that I could use their priority lane. Flight departed on time and arrived on time. During the flight cabin crew worked efficiently, however catering was quite poor compared to competitors on this line. Seating was spacious and comfortable. Landing was performed well in gusty conditions. Luggage in hold took it time to be on our belt, could have been faster. After all an excellent flight experience and money well spent. 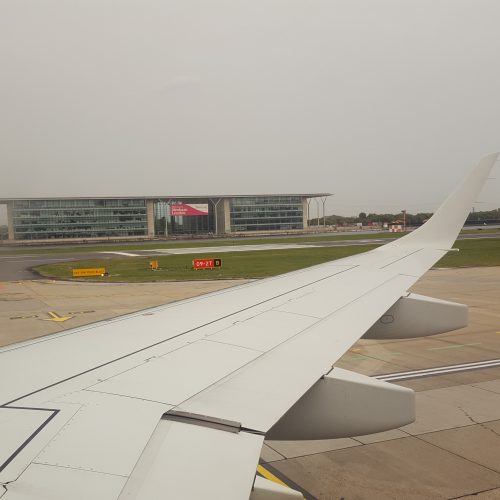 ✅ Verified Review | Manchester to London City. Terminal 3 at Manchester was a nightmare, fast track was slow. The lounge was quiet and the lunch offering consisted of soup, sandwiches and cheese, crackers and crisps, together with the usual alcoholic and non-alcoholic beverages including champagne on request. There is a view of the runway and taxi way which can be a pleasant distraction. Boarding was called and we made our way to the gate where our Embraer was waiting for us. After about 10 minutes we boarded and made our way down the jet bridge and eventually reached our long legroom seats in row 2 on the right hand side. Hot towels and menus were handed out prior to take off, followed after take off by drinks and meal requests. We both had champagne and the bbq'd salmon and salad, chicken salad was the alternative, accompanied by black forest gateau, all served together on one tray. Our cabin crew attendant was very attentive and although she helped her colleague to serve economy, still managed to provide us with excellent service on this relatively short flight. We landed facing west and quickly disembarked and was in the car park waiting for our car in a matter of minutes. An excellent flight with BA Cityflyer.
10/10

"E190 are ideal for European flights"

✅ Verified Review | My wife and I flew Berlin Tegel to London City with BA CityFlyer on an almost full Embraer 190. These aircraft are ideal for European flights, 2x2 seating and plenty of leg room. BA CityFlyer at the moment still serve food and drinks which I believe will stop later in the year. London City Airport is great, off the plane and on Docklands Light Railway in 5 minutes.
8/10

✅ Verified Review | Edinburgh to Berlin via London City with BA Citiflyer. It was overall an uneventful set of flights. The in-flight service was fine with passengers receiving a drink and their choice of popcorn, crisps or biscuits. The frequency of flights between Edinburgh and London are great but the long layover at London City is unfortunate as there are no lounges to access.
9/10

✅ Verified Review | Edinburgh to London City and first time flying BA City Flyer and enjoyed the service. Check in quick and polite, security busy but quick too, I had an hour in the Galleries lounge which was okay for a coffee. Boarding via A8 and steps on to a nice looking clean E170 - Seat 1A very nice crew pretty chatty and funny actually. Departed on time one airborne a coffee and snack offered which apparantly BA proper can no longer afford on the EDI-LHR service. It's my first time on BA CityFlyer my first time on this type of aircraft and my first use of London City. Landed a few minutes early, bags off quickly a great service. I find BA's franchises or subsidiary operated services such as Comair in South Africa or BA Cityflyer normally operate a superior service to BA.
10/10

"still give drinks and a snack"

✅ Verified Review | Amsterdam to London City. I was not originally on this flight, I was due to go to Southampton with KLM but the flight along with many others was cancelled because of the weather. The wait at the KLM transfer desk was running at over an hour so I gave up and went to BA. Very good price for a flight to LCY three hours later. Unlike their big brother (British Airways), BA CityFlyer still give drinks including alcohol and a snack on this short trip. Left an hour late due to weather. Crew fine.
11 to 20 of 70 Reviews