"not try this nightmare again "

✅ Verified Review | Luton to Tehran via Istanbul. This was the first time I was trying this airline and I never thought to be such an experience. A 2 hour delay in Luton where we were left by the gate watching the engineers checking with the engine. Once onboard, you'll find it difficult even asking for a glass of water if you don't speak Turkish. I was asking for the meal that they skipped and the air hostess was thinking that I am asking for a blanket. Second leg of flight was quite similar in terms of cabin crew and the experience got worse when I arrived in Tehran to find out that my checked luggage is not there! I had to fly to another city so I gave my details to the luggage handling company and left. I was there for a week and my luggage arrived after three days and after making three trips to the airport to enquire about this as there was no response on the phone. I will not try this nightmare again and I don't recommend anyone else to do this!
6/10

The cheapest option traveling from Luton to Istanbul, and great value with a generous hold luggage allowance. For some reason, Atlasglobal wouldn't or don't allow to print off boarding passes at home, they have to be collected at the airport, but as we had taken advantage of the inclusive hold luggage, this wasn't too much of an issue - but if you're unlucky enough to be running a bit late, this may well prove to be a bit of a inconvenience. Aircraft turned up in good time, and boarding started about 25-30mins after the plane arrived on the stand at Luton. A quick check showed us to be one of the oldest planes in their fleet, a 20 yr old A321, which showed on the inside, but seats were comfortable enough - an extra few inches of legroom would have been nice. What really let the side down, was the inflight crew. All of them looked really fed up, which was a shame, and didn't or couldn't speak a lot of English. About 30 mins after departure we was served our inclusive meal and drinks (see attached photo). the roll and salad was so dry it was difficult to eat! Drinks were served twice more and also had a cake offered too us, which was quite nice. After arrival at Istanbul Ataturk, we alighted, and the crew were more concerned about leaving the plane, with no-one saying farewell to the passengers. Journey to arrivals was via bus. 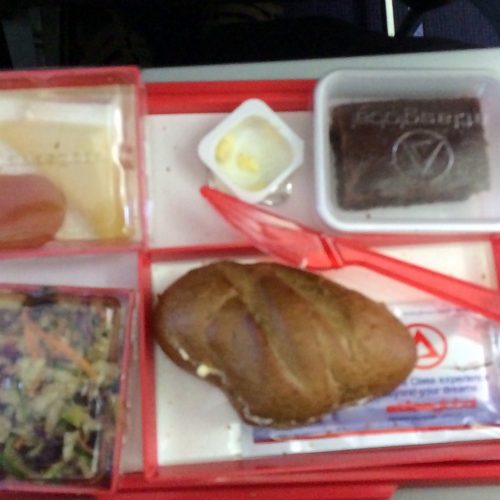 Luton to Doha via Istanbul with Atlasglobal. Connecting flight from Istanbul to Doha cancelled 3 weeks prior to departure. No email, text or phone call made. Only detected when checking in and noticed baggage was not tagged through. Ended up paying an extra 600 GBP to get seats on an alternative airline. My daughters return flight booking reference has now been removed from their website. Absolute shambles.
10/10

"free catering on board"

✅ Verified Review | I enjoyed by flying from Kharkiv to Istanbul with Atlasglobal. Ticket prices was affordable and lower than other airlines. However, free catering on board, 30 kg unlimited piece baggage allowance and nice crew were the best part of my journey. I will definitely pick Atlasglobal for my next trip.
10/10

✅ Verified Review | Ercan to Luton via Istanbul, and one of the best airlines I have flown and streets ahead of Turkish Airlines and Pegasus Airlines. The flights were trouble free and extremely comfortable. I am a shade under six foot tall and had plenty of leg room. Food and drinks onboard are free, the food is OK but nothing more. Cabin staff are polite and cheerful. Baggage allowance is a generous 38kg including hand luggage in Economy Plus rising to 48 kg in the posh seats! My checked in bags went missing on the return flight from Luton and I didn't expect to see them again. I fired an email off to Atlasglobal at 09.50 the following morning, and with the help of our ticketing agent at Ankara Travel in Cyprus also the lost and found department at Atlasglobal my bags were found and returned to me by 15.00 the same day! Apparently, the handling agent at Luton had put the wrong destination on my luggage, which was beyond the control of Atlasglobal, nonetheless they pulled out all the stops to re-unite me with my much love canary yellow suitcases! Can't go wrong with Atlasglobal going on my experience.
1/10

"did not inform of flight change"

On 12 May 2016 I was scheduled to fly from Yerevan to Istanbul with Atlasglobal. I had a ticket for 6.30 am. The company had changed the flight time to 5.20 am without informing me and I missed the flight, which caused me serious difficulties. The staff at Atlas Global office at the airport in Yerevan told me they had sent me text messages. I did not receive them. I complained to the company and their PR told me repeatedly that they have the right to cancel or change flight times without any penalties. He did not explain why they did not inform me of the flight change. All they needed to do was to send me a simple email to inform me, the same way they send me the ticket. They obviously did not bother.
10/10

"will continue to use them"

Good experience flying with AtlasGlobal from Ercan to Istanbul. Check in and boarding easy at Ercan Airport. Inflight experience was quite good. Crew friendly, seats were comfortable, food and drinks on offer was okay. Announcements from the pilot were regular especially when we were waiting on the ground after landing for more than 25 minutes to find a park. Experience at Ataturk Airport was woeful. Atlasglobal offer a good product. Highly recommended and will continue to use them.
9/10

I booked this Atlasglobal flight from Luton to Istanbul as this was the cheapest price. However, this is in no way a no frills airline. There was a very large 30kg luggage allowance and we had a lovely meal, drinks and cake despite it being a shortish flight. The service was very good and I would highly recommend it for flights to Istanbul.
8/10

Together with my wife and our daughter we traveller in December 2015 from Amsterdam to Istanbul return with AtlasGlobal. Compared with othes airlines. AtlasGlobal has cheap tickets and good luggage allowance. The onboard food also okay, and the cabin staff very nice and helpful
9/10

"was the cheapest fare"

That was the cheapest fare (55 euros) from Luton to Istanbul Ataturk that I have ever paid with many facilities, 20kg and food and beverage on board. Friendly stuff and helpful ground service. Also for the price it was really cheap and I bought the ticekt 10 days before my departure. Highly recommended!
31 to 40 of 75 Reviews