"my surfboard bag was too big"

✅ Trip Verified | Honolulu to Tokyo Haneda. As a traveling surfer I choose an airline that charges the least, or in most cases free (as your 2nd checked), no hassle and stress free. This Check in was a nightmare as I stood at the counter for 45 minutes because my surfboard bag was too big. Finally they accepted the bag and charged me $200 but the hassle was not worth it.
5/10

"I was going to skip one flight"

✅ Trip Verified | I had a ticket from Nagoya to Seattle via Tokyo and I found myself staying in Tokyo longer that I had planned. I called ANA and told them that I would not be getting on the Nagoya to Tokyo flight since I was already in Tokyo, but I would still be getting on the Tokyo to Seattle flight. They said that unless I pay them 12,500 yen ($120), that I would not be allowed to get on my flight from Tokyo to Seattle. They considered that to be changing the ticket. I was simply telling them that I was going to skip one flight but take the other.
5/10

"Good service all in all"

✅ Trip Verified | Tokyo to London. Staff were very friendly, food was nice but only had fish left by the time they got to the back of the plane. In flight entertainment was quite limited in English for such a long flight. Seats were horrendous, the most uncomfortable. Upgrades were heavily priced. Good service all in all, and still superior choice over British Airways and other rivals flying the same route.
10/10

"it's such a good experience"

✅ Trip Verified | Houston to Hong Kong via Tokyo. ANA lives up to its reputation as a 5-Star airline and it is easy to see why. I paid US$825, all-in including taxes, for a round trip journey of 3 legs in each way. HKG-NRT-IAH-LIM & back (United Airlines codeshare IAH-LIM). Incredible pricing. Even from the ground, the check-in process (Haneda) was seamless and it took us a mere 10 minutes for check-in and security and immigration combined. Despite the aircraft (B767 & B777) being of some age, their interiors were retrofitted with up-to-date IFE (with a huge selection of the latest movies, no lagging or dead screens), and USB & laptop charging ports. The widebody aircraft meant that overhead storage space was more than sufficient and nobody had any problems finding space for their bags. The legroom in economy was one of the best we had ever experienced in economy. Recline could be better. (I'm 5"11 or 1.81m and I could stretch my legs out fully), seats were fairly comfortable and I had no problems sleeping 6-7 hours at a go on the 13hr flight and this is in economy. FA service was extremely hospitable. They served 2 meals and a snack over the course of 13 hours. The meals were great and as good as what some average Japanese restaurants would serve. It is also worth noting that the checked baggage arrived with no incident. The only minor gripe, perhaps, is that the 3-4-3 configuration in economy is quite a squeeze. But still, overall, it's hard to complain at such a price point. Even in economy it's such a good experience. They deserve to be consistently at the top of world rankings in all categories. 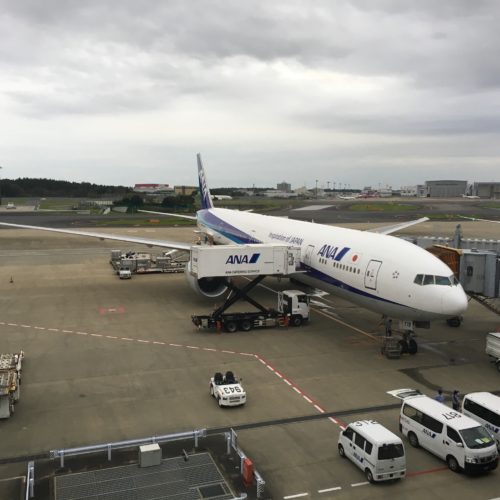 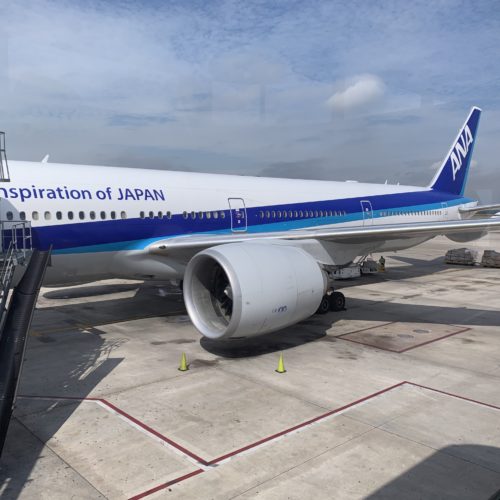 ✅ Trip Verified | I flew with ANA on 10/8/2019 from Taipei to Tokyo, and the in-flight service is fine and very satisfied. My scheduled return flight was on 10/12/2019, the day of Typhoon Hagibis. When Typhoon Hagibis was about to hit I got their notification by SMS that the return flight was canceled, but they didn't give further information of an alternative flight. I called my travel agent for help, they told me there is very little they can do on their side, and I have to call the ANA English call center for alternative flight arrangement. I called multiple times, but the line was busy, and finally the call was through, and I was directed to waiting for available service personnel. After 1 hour waiting my call was finally picked up , and arrange us into their 10/13 flight at the same departure time. In the next day afternoon, I got the notification again that my flight on 10/13 was canceled again. I called the English call center again, multiple times, but I kept getting automatic Japanese audio reply which I don't understand, and couldn't get through to their service personnel. Later, I found that their call center was down due to surged calls. Next day I went to Haneda airport when the transport services resumed, we were directed to ANA special service counters crowded with passengers. We were told the earliest flight we can took was on 10/18, that was all they were authorized to provide on the site. And we were offered the Eng call center no. which was expected to be available again in the night of 10/13, and asked us to call the center for other possibility. That is ridiculous to me, what is the point of setting up S-counters, and have customers to wait multiple hrs (>4 hrs for us), and then tell us to call a charged call center again for additional help? 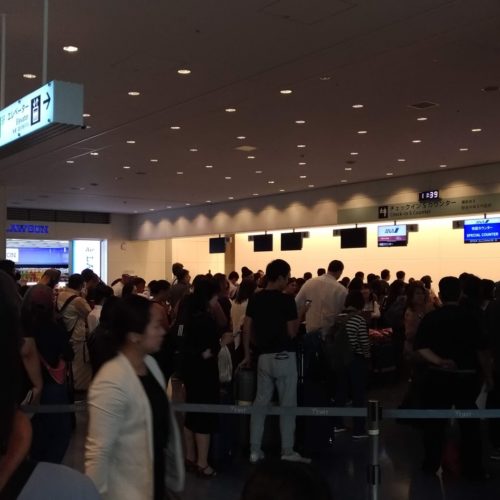 ✅ Trip Verified | Tokyo to Kuala Lumpur. Decent airline but poor ticketing and check-in system. Check-in at ANA counter always takes me more than 30mins because their system indicates that the name on the check-in system and name on passport is the other way around (First name, last name). This happens even though we strictly follow ANA'S online reservation system guideline on how to input names for people from various countries. I explained this to the ground staff at Narita and Haneda multiple times but their response is usually that the reservation system is handled by another department. Discrepancy between reservation system and check in system is definitely a possibility. I can't add my miles because ANA mile systems has a totally different rule for passengers without dedicated first name and last name. So I have given up Using ANA mileage but now using United mileageplus. My family and I are relatively frequent flyers yet we never experience this with other airlines. With ANA, same problem has been going on for at least 2 yrs but we have not seen any improvement since.
4/10

"climb up stairs to the plane"

✅ Trip Verified | Narita to Kuala Lumpur on flight NH815. After arriving at my gate, I started to feel weird as we are boarding through buses. You have to climb up stairs to the plane carrying your hand luggage. Maybe I have too high hopes for a 5 star Japanese airline. We are paying for service as a customer.
10/10

"ANA is always a pleasure"

✅ Trip Verified | Bangkok to Tokyo Haneda. Flying with ANA is always a pleasure as even before boarding the flight you know that the service will be of a very high standard due to Japanese custom of serving the client! Hence, it was no surprise that the flight has outstanding service from the Japanese and some Thai crew. Drinks and food was served in a superb manner, plane was very clean, toilets very super clean and if or whenever you called for service the crew came immediately, spoke with the most respect and promptly served you. This is a wonderful airline which I feel even Singapore Airlines and Cathy cannot match and they are great. However, what really impressed me was how professional the Purser in charge of my section; Ms Nagakawa was! I asked a Crew member for a customer form not realising that they would consider this as me being unhappy and raise it to their Purser. Ms Nagakawa came to me and said, "Sir, you have asked for a customer form, could you give me an outline of what the problem is?" The way in which she did it and showed concern made me realise what high standards this airline puts in pleasing a client and if the client is unhappy in anyway, they don't speak down to the client like other airlines do, their senior team members come professionally to appease the situation and help the client enjoy their flight. Luckily for her I had good news about how wonderful the flight was. She so politely spoke to me and appreciated it but that was not just it, she continued to maintain high standards by constantly checking on me and personally serving service of a high standard. An absolutely magnificent Purser who led the team by example and I had one of the best flights of my life. My return flight too was superb with high quality service from ANA. I highly recommend this company for safety, service and most important of all the way in which you as a client are respected! Thank you to ANA for employing such wonderful staff like Ms Nagakawa and the other crew as well as setting such high standards
10/10

"serving with their hearts"

✅ Trip Verified | Perth to Fukuoka via Tokyo. I would like to convey my deepest gratitude to the ANA ground staff/ supervisors in the check in desk areas at Perth International Airport. Before I could check in, I realised that I had accidentally left my mobile phone inside the car that dropped me off and I had no way of contacting them to retrieve my phone. In my distress, I turned to the first airport staff I met and they happened to be the ANA check-in supervisors. I had asked them on what I should do, whether I should check in first or try to retrieve my phone. Instead of providing me a textbook answer or redirecting me to the airport information desk, she offered for me to use her own mobile phone to call my family. I was shocked and deeply grateful. I had to make multiple calls on multiple phone numbers. But she remained She even continued to help me call my family as I checked in. They were patient, calm, and immensely helpful. In the end, I was able to retrieve my mobile phone. I am so grateful for the superb customer service. This is true service, serving with their hearts. 110% recommend. Will definitely fly ANA again!
31 to 40 of 529 Reviews