"No snacks were offered"

✅ Trip Verified | Mauritius to Perth. I was quite appalled by the quality of both the dinner and breakfast options, and the old movies onboard. For dinner, I had tasteless vegetable, chicken rougaille and rice and for breakfast we had a slice of cake. No snacks were offered during the flight. 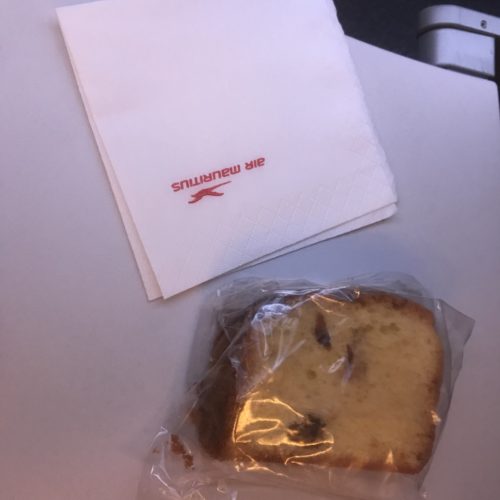 "All in all a great trip"

✅ Trip Verified | London to Mauritius. Excellent experience, even though we diverted to Madagascar. We were nearly landing in Mauritius when the plane diverted to Madagascar due to a cyclone. Air Mauritius provided shuttles to an Ibis hotel, covered all the buffet meals while we were there (and accommodation). There was a lack of shuttle buses so many people had to wait long periods to reach the hotel. We took a taxi and paid ourselves, which was a great idea. The room and food was arranged without us requesting it, so we're grateful for that. Communication was good in terms of catching a flight the next day to Mauritius. Legroom was good on the flight. The food was inedible, which is my only complaint. Airline staff was lovely, friendly and accommodating. All in all a great trip, they handled the delay well and will definitely consider flying with them again.
5/10

✅ Trip Verified | We were supposed to fly on 29th December. Due to a cyclone in Mauritius, the flight was first delayed, then eventually cancelled. Air Mauritius did inform us the first time, but the second time, everyone had already arrived at the airport. We were standing in line when we got notified that the flight was delayed, and then cancelled. Then we were informed at 1 am that the flight is scheduled for the 31st December at midday. We finally went through the boarding gates, took a bus to the aeroplane, and there we were - all standing on the 'runway' outside the aeroplane, waiting to board. We were outside for probably 30 minutes, then sat in the plain for another 40 minutes, without any communication about what is going on. When we finally took off, the captain apologised for the delay, but with no reason as to why. We had to ask the air hostesses every time if we needed something to drink and then they looked at us as if we were asking for something that was not allowed. They were unfriendly to us and not hospitable. When the food arrived, they ran out of the chicken option and only had fish left. My husband's fish was undercooked. When we arrived in Mauritius, we were once again stranded on the runway, without any busses, staff to communicate with or any means of getting into the airport. We were standing around for some time until we finally got picked up by one bus. We waited for more than an hour to get our luggage. On the flight back, although we were delayed by an hour, the service was a lot better. Drinks were offered all the time and the staff was friendly. Very inconsistent service. Air Mauritius did not contact us at all about the delay, asking if we would like to extend our stay or offer any discounts because we have now arrived almost 3 days later and missed out on the short time that we had on the island. Car hire was and accommodation was affected. I understand that this was an act of God, but it's all about customer service.
1/10

✅ Trip Verified | Shanghai to Mauritius in August 2019. Our flight from Mauritius to Shanghai was scheduled the day of. They didn't bother to let us know until we were already checked out of our hotel. They did not make any effort to reimburse us for our meals even though we had to stay in Mauritius for an extra day. We had to jump through hoops just to get them to pay for our hotel for an extra night. I would never recommend this airline.
5/10

✅ Trip Verified | Mauritius to Mumbai return. The food is ok on departure but they served stale buns. The seats are comfortable and flight attendants are nice and helpful. The flight delay by 1 hr we were sitting in the plane with kids, nothing served until 23.30, our flight were supposed to take off at 21.20. Returning from Mumbai was the worst meals served on this flight. Priority for meals should be given for kids first, not those who ordered.
4/10

"were the cheapest airline"

✅ Trip Verified | Perth to Nairobi via Mauritius in June/July 2019. Their check-in baggage allowance of 23kgs is a hit below the belt to say the least. In-flight entertainment needs a serious upgrade as movies and TV shows were outdated. Cabin crew were friendly, but most of them mainly spoke in French. They were the cheapest airline at that time of the year, and they offered 2 free nights at Hennessy Park Hotel during transit, because they have limited flights to Nairobi.
9/10

"It was a very nice flight"

✅ Trip Verified | Mauritius to Paris. The legroom was huge for an economy seat. The seat was very comfortable and the crew was super nice. The entertainment was great, a lot of movies, series, music. The meal wasn’t that good but it was okay, and the ground crew wasn’t very present for us, and boarding was a little messy. It was a very nice flight.
9/10

"the flight was pleasant"

Not Verified | Paris to Mauritius. The plane was new, clean and comfortable. The entertainment was good, but insufficient charging ports for electronic devices. The meals (dinner and breakfast) were good and plentiful, much better than our previous flight on Air Canada. The flight crew were friendly and helpful, and the flight which was eleven hours, was pleasant.
7/10

✅ Trip Verified | Mauritius to Paris CDG. Check in process was slow with long queues, even though I was using the priority check in queue, only two desks were open to handle 4 Air Mauritius departures, in total the wait was around 40 minutes to check in, however when I finally got to the check in desk the process was efficient. The lounge experience is detailed separately. At the departure gate, the process was chaotic. There were 9 gate staff standing around but only two actually doing any work. The staff were unfriendly and didn’t want to engage with the passengers. They gave the impression that they didn’t want to be there doing the job and did not come up to the Air Mauritius standard for customer service. This lowers the overall rating given. The gate staff began releasing passengers before the crew were ready to receive them. I was the first passenger to the aircraft and had to wait on the air bridge for 5 minutes while the cabin crew finished their cabin preparations. Once on board, the cabin crew were what I had become accustomed to with Air Mauritius, they were friendly, welcoming and helpful and are a credit to the airline. This A340-300 was one of the refitted aircraft and the cabin was very nice. This aircraft now has lie flat beds in business and the interior is now similar to the A350, minus WiFi. Seats are comfortable. Food and beverage service was good and the food was surprisingly delicious. The departure time was 22:30 so it was late to eat a main meal, but non the less it was good. Breakfast was served 90 minutes prior to landing and was adequate. It’s difficult to make airline breakfasts anything special. I didn’t use the IFE but there did appear to be a good selection of films to watch.
9/10

"this is highly recommended"

✅ Trip Verified | Paris CDG to Mauritius. My first flight with Air Mauritius and generally speaking I was impressed. The aircraft was an A350 so the aircraft is relatively new, which is always nice. The business cabin was roomy and comfortable. Food and beverage service was good as was the quality of the food. Unfortunately WiFi which is complimentary for Business class passengers, was out of service, which was disappointing. Seats are lie-flat bed type and are comfortable with enough space. Inflight entertainment was ok, there was a good selection of films etc. The boarding process at CDG was chaotic and very badly organised. At MRU, ground services were excellent and speedy. Generally speaking very impressed with the Air Mauritius Business Class experience and this is highly recommended.
11 to 20 of 185 Reviews