"Staff is very kind and happy"

✅ Trip Verified | Milan to Male. Nice airline. Very good in all services. Economy class is a very good class. Beverages are very good too with a lot of product. On my flight services were 3: snack, lunch and a afternoon snack with a slice of pizza. If you need something else you can ask to steward that will help you in every moment. Staff is very kind and happy. Good airline.
5/10

"Air Dolomiti worked okay for us"

Not Verified | Munich to Bologna and Pisa to Munich, both on an Embraer 195, economy. Both flights handled efficiently, southbound on time, northbound delayed by about 25 mins on departure due to to late arrival of incoming flight (there had been thick fog at MUC early that morning which had sent things adrift for much of the morning). However, support given to those with tight connections. Modest in-flight service - snacks and drinks - wine came in proper glasses. Air Dolomiti worked okay for us.
1/10

✅ Trip Verified | My flight Catania to Milan was 2 hrs late and when we arrived no one from Air Italy was at gate to help us to catch our flights to Miami which we missed. No one at transfer desk. Doors locked to floor for check in desk. Security would not help. We were told flights would wait but air Italy did not. It took many hours, even business class, to secure cheap hotel room far from airport. They would not even give me seat or ticket for flight next day. When we got To this hotel, their restaurant already closed. I finally gọt seat the next day with no apologies. WiFi not free for business class.
7/10

"my bag never showed up"

✅ Trip Verified | New York to Catania via Milan. We flew business class on the way over on this trip. Service was okay. Food was not great. Upon arrival, despite having 'priority' tags on our bags my bag never showed up in Sicily. There was no way to contact anyone at Air Italy and they only have 1 person who manages lost and found bags. No compensation or return upgrade was offered. I had to spend every day trying to track my bag and spend money to replace things. A complete waste of precious vacation time. We arrived on Saturday afternoon and I didn't get my bag until Thursday afternoon (we left Italy a few days later). When I inspected my bag I realized they cut through 2 sections of the bag even though there was a TSA lock and I gave them the code. They also went through my belongings for no reason (my original tag with name and information was still attached). Everything was just shoved back in haphazardly. It was also impossible to get a hold of anyone on the phone (used the US toll free number), you wait on hold and then the system hangs up on you. They really had a negative impact on my vacation and cost me a lot of money. 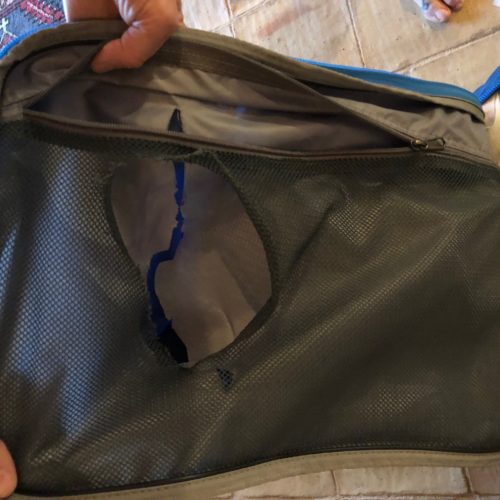 "not impressed with the staff nor the plane itself"

✅ Trip Verified | Although my original flight from New York to Palermo was on time I was not impressed with the staff nor the plane itself. The staff were rude and not friendly at all, instead it seemed we were more of a nuisance rather than paying customers. On our flight home we were delayed over 3 hours and we were never informed prior to arrival at the airport. This delay led us to miss our connecting flight to New York. Although issues may arise with the planes the way they handled the situation was unprofessional. Once we arrived in Milan they gave us little direction on where we needed to go in the airport and we wasted an hour trying to figure out what we needed to do next. The airline put us up in a hotel and said we would leave the next day at the same time. At the hotel they provided us “dinner” which included dry pasta, processed chicken, mush for green beans and potatoes. When we asked for more sauce for the dry pasta they refused to give it to us unless we paid for it.
1/10

✅ Trip Verified | We arrived at SFO Air Italy desk to see staff was just standing around and talking, it was as we where inconveniencing them. I was trying to ask questions but they would over talk me and not take the time to listen to my questions. I just gave up on asking about our seats. Worst customer service ever. On our flight, the attendants stood in the back galley talking. This is not an airline I will be flying in the future.
3/10

Not Verified | Flew Business Class from Milan to New York. Worst Business Class I have ever experienced. We were made to stand for one hour before boarding and the gate agents were never advised by the Captain that the flight would be delayed as the plane had to be cleaned! The board stated that we were leaving on time though this was clearly not the case. All they had to do is post a new departure time instead of leaving the original departure time on the board. I suspected something fishy in Cagliari when I noticed that 2 of their flights to Milan were over one hour delayed. Fortunately we flew Alitalia on this route. The food was awful except for the pasta dish which was served lukewarm. The seats were not completely flat but this did not bother me. The Purser insisted that everyone on the plane put their shades down though this was a day flight. The whole economy section was in the dark! He kept on putting my shades down without my permission. When I told him no the 3rd time as I was reading he told me to put the light on. I insisted on keeping half of one shade up. Their Dining on Demand like on Qatar and Etihad is a joke! They don't follow the time you request to eat and even forgot the desert. If they can't do it properly don't do it! The steward got angry with my travelling companion because she fell asleep between the hour we asked to wait for the entree after we had finished the appetizer. He had to reopen her tray table and the tablecloth had fallen to the floor. Seats are not fully flat but this did not bother me. The economy class legroom looked awful too. Clearly a 2nd rate unprofessional operation. Inflight entertainment was very limited and the music / audio pretty bad. OK they give pajamas but quite frankly I never wear them, especially on a day flight.
3/10

"I literally was trapped"

Not Verified | New York JFK to Rome via Milan. First: Ticketing Counter: Very inconvenient counter locations at the airport, the farthest counter from everything, around the corner and hidden behind all other counters that you actually have to ask someone to locate. By the way, they do not affiliate with Air Italy. First I thought it was just at JFK but to my surprise it was the same setup in Rome. Seems like they picked the cheapest counters at the airport. Second: Leg Room: Let's start with tight seats with no leg room, they do not meet the standard requirements. Once the seat in front of me is reclined, I literally was trapped and could not get up. I could not even close the food tray that was jammed on my lap. Wanted to reach out to flight attendant for help but obviously couldn’t reach out the overhead help button. No one walked by for hours until dinner time, but even then she was not able to help. As if people in economy do not matter at all. I understand that they have to treat upper class customers better but they cannot ignore economy class to that level. Third: Baggage Fee: No charge for luggage from US to Rome but they hit you with 'No luggage allowed' policy for economy unless you pay 100 euro each. As if it’s not the same bag came on the flight in to Rome. Why charge only one leg of the flight? When I refused the pay, they referred me to the supervisor who finally showed up after half an hour but was not helpful at all. In fact she was extremely rude and pretty much said to us “this the way it is whether you like or not”.
10/10

Not Verified | My flight was to Milan from Toronto and return. Check-in was fast, the crew were polite and efficient on the ground and in flight. For the most part both of my flights were on time, just on the way back there was a delay of 2 hours but Expedia had informed me through e-mail 2 days prior of my flight. I was pleasantly surprised regarding the meals served on board to and from Italy, not only you can choose from a menu but the food was delicious! Also I found that choosing the option to pay for checked baggage on Air Italy site was much cheaper than paying at the airport, I paid in Canadian dollars instead of euros. I usually fly with Air Canada but Air Italy was much cheaper in comparison. The only thing that I would appreciate is that when choosing the option to pay for my checked bag online that it would indicate "1 checked baggage included" at time of booking. The flight was smooth and very pleasant. I will definitely fly with Air Italy again in the near future.
1 to 10 of 31 Reviews