"it has managed to avoid paying"

✅ Trip Verified | Florence to London via Dusseldorf in September 2017. First flight from Florence delayed by 3 hours, resulting in missed connection. This wouldn't have been an issue, especially considering the airline was meant to reimburse all customers for costs of the delay. However, my checked baggage was misplaced. Again, this wouldn't have been an issue under normal circumstances. I spoke to the baggage handler who told me to come talk to him prior to the next mornings flight, which was due to leave at 6am. I was forced to pay for a taxi which totalled 100 Euro each way (with promises of reimbursement) to the hotel which the company had placed passengers in only to stay there for 4 hours before having to leave again to catch the rescheduled flight. When I went to see the baggage handler I wasn't able to find anyone in the department. I went to the Air Berlin help desk and after explaining the situation to the woman at the desk she said there was nothing she could do. I asked if she was able to call the person who handled baggage as I needed to put my checked luggage on the new flight and she said she could but wasn't going to. When I asked again, saying "Please, I need to catch my flight on time. I can't wait for someone to answer me knocking at the door, my flight leaves in less than an hour and I have to go through security" She promptly said to me (in these exact words) "Why don't you just do everyone a favour and go away." I flew to my destination sans baggage and deeply offended. Being under 19 years old at the time and a solo flyer I am to this day outraged by the lack of sympathy and understanding of the customer support team. I had to wait 4 whole weeks for my luggage to arrive at my final destination. The airline owes me over 500 Euros in reimbursement, which it has managed to avoid paying due to their own fiscal troubles. I hope this airline is never resurrected and that no one is treated like that in there travels.
8/10

"was one of my favourite airlines"

✅ Verified Review | Düsseldorf to Catania via Rome. Booked Alitalia, got Air Berlin. I was prepared for delays and even cancellations, because of the insolvency of Air Berlin. And indeed: our original inbound flight from Catania tot Düsseldorf with a change in Milan was cancelled, but within 10 minutes we were moved to the direct AB-flight CTA-DUS. Even better. So we had two punctual flights, with a friendly crew and reasonably priced drinks. Leg room was awful however. I like the small route screens on Air Berlin aircraft. But it's all over since Air Berlin stops flying in a few days, so no recommendation. Pity, because Air Berlin was one of my favourite airlines. Never had any problems.
9/10

✅ Verified Review | Milan to New York return via Dusseldorf. I had a very positive experience with AirBerlin - on all four of our flights. The prices were phenomenal - all four of us flew economy roundtrip for less $2,200 - although they did charge me quite a bit for seat reservations - with 2 small kids, you can't really make a good case for 'oh honey sorry you get to sit to that stranger." Everything ran on time. The seats are as about tight as most US airlines - though not as bad as United's back rows. But we fit fine, video was working (with lots of options for watching), food was ok-ishand the attendants were quite helpful and very nice. Really, I have no complaints. And yes, I did check in luggage on the way back - because who doesn't overshop in Italy? - and I got them back in NYC. We were all nervous about this due to all the bad review of lost luggage. In fact it is why I am writing the review - as I promised myself I would write a good review if we arrived home intact with a good experience. I fly Business for work - I was expecting worse but was very pleased as were my husband two kids (8, 10)
1/10

"Definitely avoid if you can"

✅ Verified Review | Berlin to Prague. Worst experience I’ve had for a while! They announce 2 hour delay, then no info until we understand that once they have a plane they must wait for a new crew. Very bad organisation and communication. Definitely avoid if you can, lost my time and couldn’t make my meetings.
10/10

✅ Verified Review | Frankfurt to Berlin, our first flight was cancelled but they arranged me other flight. Next day I use Air Berlin also this time their service was on time and good service and cabin crew - they are very friendly and helpful. I was very happy their service.
1/10

"don't recommend it at all"

✅ Verified Review | Worst airline ever, poor customer care. Representatives are rude and not helpful. My flight from San Francisco to Prague (with only one connection stop) was cancelled without any notification and explanation as to why. Air Berlin representative was not helpful at all. We were told that we would be flying via a different airline, however, didn't give any information regarding flight number, refused to print any documents proving that we had the new flight with a different airline. In addition, they gave us a flight with two stops (we could have find tickets much cheaper with two stops). Do not recommend this airline, they just lost two customers. On my way back another Air Berlin representative was extremely rude, plus she overcharged us for overweight luggage (we had to pay 100 euros for 27 kg luggage). On the board they didn't offer any drinks (water or coffee) from Prague to Berlin.
1/10

✅ Verified Review | Bonn to Prague via Berlin. Absolutely bad experience. I bought flight at 5pm from Berlin and instead they put me on flight at 9pm. Nobody was able to explain me why. After staying in line for almost an hour to actually talk with someone they tell me that I have flight for today so they don't understand why is my problem - if they would tell me up front that the flight at 5pm will not happen I would fly directly from Bonn to Prague at 7 pm. These people are cheating their customers.
4/10

✅ Verified Review | Helsinki to Berlin return. the terminal in Berlin looks like an abandoned warehouse. The Boeing 737 had the A320 safety sheet. The seats were leather, and quite worn out. The flight left TXL on time. I am an Emerald member on one world however they did not recognise me on this flight nor the departing flight (no greeting, benefit, drinks, nothing). They charge 2.5 Euros for a cup of tea and the inflight entertainment via wifi must be purchased. Not recommended as they are pricier than budget airlines. 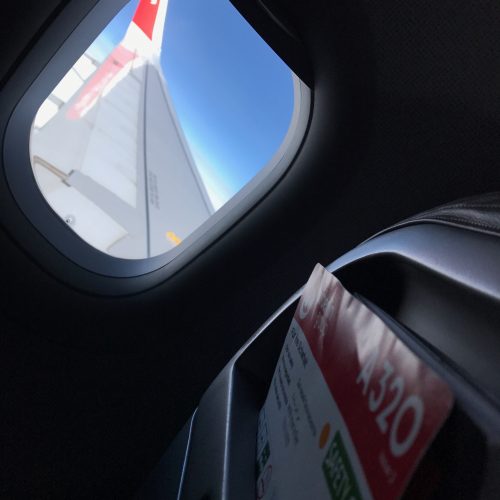 "Not a good first impression"

✅ Verified Review | Berlin to Geneva via Dusseldorf. Not a good first impression. First segment no order to boarding process just one long line regardless if your seat assignment. Delayed 30 minutes announced 10 minutes before scheduled boarding time. No explanation why. Onboard, the least amount of legroom I have ever experienced. Take off was finally one hour later. Second flight delayed 35 minutes to late arrival of the aircraft.
1 to 10 of 483 Reviews