✅ Trip Verified | Casablanca to Tunis. Bad service, overcharged 60 euros at the airport for no reason, staff would not let us board the plane until we pay the 60 euros which they poorly explained was because we were "late" even though 2 other groups of passengers were allowed to board while we were there. The plane was then delayed for over an hour. We paid for additional meals when booking, we never got those, and the cabin crew ignored our requests and our proof of order, we were then presented a menu telling us we have to pay again to get food. They ignored our official complaint on their website.
1/10

"have never encountered an airline so incompetent"

Not Verified | I am writing this with complete dismay, disappointment, shock, helplessness, and utter anger. If you know what is good for you, avoid this airline at all costs. I have dreamed of a Morocco trip since 2005. This trip is a lifelong dream. I've booked multiple flights in and around Morocco for October to November. In a span of several weeks, almost each single flight has been moved and re-scheduled. The last straw was when I received an email today notifying a flight change that will mean losing 2 days in Morocco and completely ruining the entire itinerary and losing some paid transfers and tours in the process. I am in complete disbelief as I have been traveling for 28 years and have never encountered an airline so incompetent. They have removed every single way to reach them. All emails are automated, you cannot contact anyone through email, and the number they gave to call is also not in service. I feel so helpless and our trip has been single-handedly ruined by Air Arabia even before it began. I have lost all hope and excitement for this trip and even if I somehow manage to find a way to adjust our itinerary, it will still not recover a portion of the trip that has already been paid for. This company should be banned because all reviews here have a horror story of their own.
1/10

"you have absolutely zero rights"

✅ Trip Verified | 6 hours delay from Fez to Gatwick and zero compensation. Reason is that the company not registered within Europe. Avoid because you have absolutely zero rights. Even Ryanair is better abide to European regulation. Avoid avoid.
10/10

✅ Trip Verified | Sharm El Sheikh to Amman. Perfectly smooth check-in process, our car seats for the kids were handled without fuss. One bag was 23kg but was not a problem. Contrary to some other reviews, our carry on bags were not weighed. We had a 10kg limit in any case. Staff on the flight were very pleasant. Although only an hour-long flight we were given beef shawarma - extremely tasty. Would use them again.
1/10

Not Verified | This was probably the worst experience I've had with an airline. In hindsight, I should have opted for a full service airline even at the premium cost. Our flight was on the 22nd of August, Sharjah to Kuala Lumpur. We paid for seats up-front (in row no. 4) hoping that we'd be able to travel with others who place a premium on their peace of mind and convenience. I could not have been more wrong about this. As soon as I sat in my seat, a raucous, rowdy group of customers walked in and sat right in front of us in Rows no. 2 and 3. At first, it just looked like a bunch of young people who were flying to KL for a good time and they'd settle in after a few hours of in-flight fun. Something told me that this trip was going to be problematic, but I just chalked that up to older me nerves. Drink service started. Our merry band selected a plane load of coffee and Red Bull for dinner to go with some sandwiches that AA provided. Being an overnight flight, once service was stopped, cabin crew switched off their lights. As they say, the party started after the lights went off. The group on the left put on their reading lamps which needless to say is quite jarring and did not aid in anyone falling asleep in a 2 m radius. The group on the right seemed sober and some of them curled up to sleep. The others were high on Coffee and Red Bull so they were fully charged up. I went up to the cabin crew and requested them to ask this bunch to simmer down. It was about midnight UAE time and it is my belief that a paying customer is entitled to his sleep during the flight. To my surprise the cabin crew shrugged and said there was nothing they could do. Apparently, this was a group of 'bloggers' who were invited by Air Arabia to review the airline or its holiday package. The cabin crew supervisor went so far as to tell me to go complain if I wanted to and they couldn't care less. The shenanigans continued late into the night and at this time, my normally docile wife spoke up. We asked them respectfully to tone it down so that we could get some sleep before our onward flight to the next destination; to which we got a casual dismissal and was yelled back at. Cabin crew came to calm down the situation, which was the best they could do. After this incident, their belligerence was unfettered for the reminder of the flight. The laughing and the talking were louder and unbelievably uncivilized. In effect, I paid additional to be harassed by a bunch of low-life thugs aided and abetted by the service provider. We were rendered powerless by an apathetic cabin crew and an airline that frankly does not give two hoots about the rights of its paying passengers. I have been flying Air Arabia since its inception, but I am completely done now. A loss of one customer means nothing to Air Arabia but it is my hope that reading reviews like this would give people an idea of the kind of people they give their money to.
1/10

"charge me for my laptop weight"

✅ Trip Verified | Gatwick to Fes. Beware of the hand baggage allowance! They charged me 50 euros for exceeding the maximum of 10kg just by 3 kg. and on the same time the flight was almost empty! I didnt have any other complaints but the whole thing with the hand luggage was really ridiculous! The worst part is when I refused to pay 50 euros, the staff tried to bargain so I could pay 35 euros! Totally unacceptable and unprofessional on the whole. They were actually blackmailing me, without giving me the ticket to board if I i didnt pay for the 50 euros charge. And that was just for 3 kg more! I think rules are rules but when you know that the flight is not really full and you dont exceed the allowance by 10-20 kg, I think it should be acceptable that 3kg wont hurt anyone. I would never recommend anyone book with this airline rather than picking up a more serious one and more professional.
10/10

✅ Trip Verified | Casablanca to Lisbon. I found this airline to be much better than expected. well cleaned aircraft, friendly flight attendants. On schedule too. Very comfortable seats. They sould increase their flights to Portugal.
8/10

✅ Trip Verified | Marrakesh to Fez. The domestic check in was handled by Swissport and was efficient. The security screening took about 30 mins. The departures lounge was relatively compact and seating was limited. We were bussed out to the aircraft an A320. The flight took off about 10 mins behind schedule As it was overcast there was limited views of the Morroco on the 50 min journey to Fez. The crew were friendly & efficient and were quick to serve passengers that had pre-purchased food and beverages on the short flight. Air Arabia is a dry airline and no alcoholic beverages are sold on board. We arrived into Fez on schedule. Despite being a domestic flight were were required to pass through immigration who required both the boarding pass and passport. We waited for about 20 mins for our bags to be delivered. 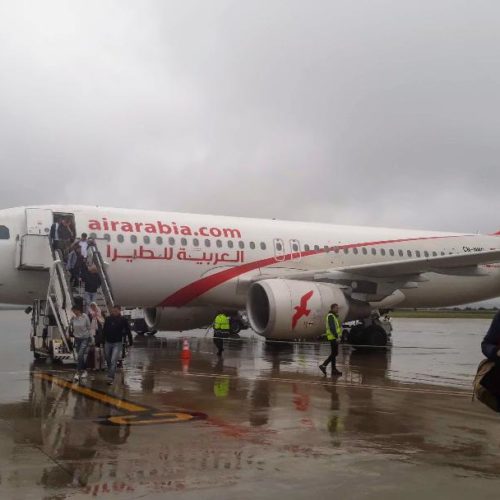 "the service was very good"

✅ Trip Verified | Flew Air Arabia from Sharjah to Muscat (and back to Sharjah) as part of a visa run (UAE visa change). Really liked the cabin crew and on-board experience. Cabin crew were very well presented. A lot of the passengers were non-English speakers and I noticed the cabin crew were very polite and treated all of them with dignity and respect to help show them to their seats and put away their cabin bags. Plane was new, seats were clean and plane had a free-Wifi network streaming movie/TV programme (they called it SkyTime) which I used via my smartphone - it was fast. Bought snacks and coffee on board - nothing special but the service was very good. I am an experienced traveller and I really liked this airline and their onboard experience. I would fly with them again.
11 to 20 of 97 Reviews