"will not fly Air Algerie again"

I returned on the flight from Algiers to London Heathrow on the 20th December - the flight was over 3 hours late it was scheduled to take of at 10.20am, however 2 hours later no sign of taking off, no information given for the delay, no refreshments offered and worst no apologies specially since the staff where hovering around passengers like zombies. Anyway 2 hours later a call on the speakers said that all Air Algerie passengers should go to gate 16 for an immediate take off which was at the other end off the airport - everybody rushed to the gate thinking that we will be on air in few minutes. When we got there was a long queue and no sign of the aircraft the staff where sitting there like zombies and there was no explanation offered for the delay - about an hour later a very painful and very slow gate checking process started. Still no information on the delay however by that time it was too late anyway, the transfer to the aircraft was by bus and I waited to the last moment to present myself to the gate desk to avoid stuck in the queues unnecessarily. The waiting in the bus was like for ever and to make matters worst it seems the bus did the tour of Algiers to get us to the aircraft because it was at the other end of the runway. When I got in the aircraft I asked why the delay and I was told it was due to the baggage handlers strike. I asked why didn't Air Algerie offer any information, explanation, refreshments or apologies I was told that even the staff didn't know as they where told to carry on with their duties. Still nobody apologised until take off by the captain which was at around 13.30pm. I have championed Air Algerie over other carriers like British Airways but I am extremely disappointed and to add insult to injury I have paid £50.00 more than traveling with British Airways for the same journey. I can promise you that I will not fly with Air Algerie ever again.
3/10

My flight on 1st June from Algiers to Lisboa (Portugal) was a nightmare. The check in was extremely slow and the sequence of spot check was complicated. All forms were in French and fortunately I knew some words, but most of the guests got confused. The aircraft was very old and food was lousily prepared. The toilet was like a public non-cleaned toilet for years. Seats were not comfortable and some could not be reclined. But the captain and crew were nice, particularly since they knew I was from Vietnam and they talked in both french and english nicely. Appreciated when they found the lost wallet of my friend. 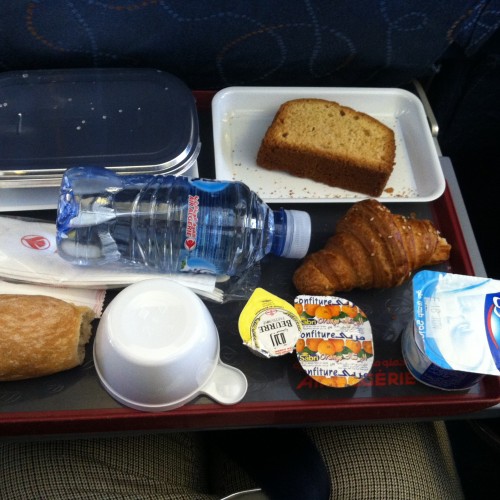 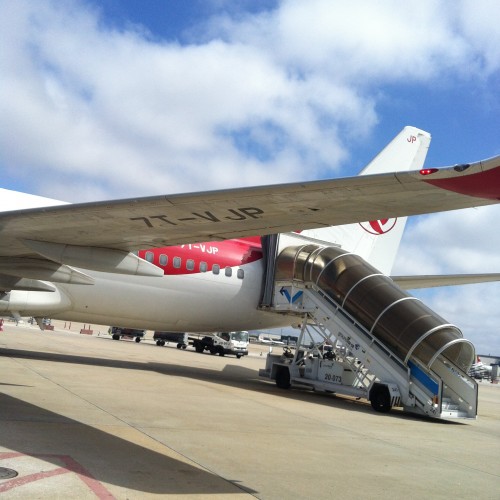 Lille to Algiers. The flight has been delayed (2hrs), but the Air Algerie's airport workers gave us some sandwiches and soft drinks to apologize for the delay, a good point. The cabin crew were very professional. The aircraft (B767) was clean and in a good shape. The meal was excellent. Tea, coffee, and soft drinks have been served inflight. We landed smoothly at Algiers. The ticket price was good, and includes in it 30kg of luggage. A very good experience with Air Algerie.

Flight Paris CDG - Algiers. Flight was more than 3 hours late and no explanations were given by the Air Algerie ground staff. The aircraft was old and very dirty. Food was still on my seat. Cabin crew were very unprofessional and not friendly at all. Food was ok. Only one toilet was in service. I will never fly again with Air Algerie.
8/10

Paris to Algiers then to Ouagadougou and back. Overall I found this airline good value for money: they are cheap and offer minimal service. The aircraft's were old but kept in a good state except for the washrooms which were disgusting. Seats were rather comfortable. On the Algiers-Ouagadougou leg 1st class seating was attributed randomly to economy passengers. The meals were excellent even on the shorter Paris-Algiers flights. The food is halal but wine is available. Of my 4 flights only one was late by about one hour. No information whatsoever was given while we were waiting but the crew apologised once we were let in.
9/10

Nov 1 Algiers-Ghardaia by ATR 72. 1 hrs late departure due to late arrival of the aircraft. Confusing as destination "Oran" was shown at the departure gate. Flight full. Some biscuits water and a soft drink was provided. Announcements in French and Arabic only. It is a domestic flight but on arrival and departure immigration has to been cleared. Return Nov 3 Flight on-time long wait for the luggage in Algiers because of a parking problem. Airline recommended as flying is better than 10 hrs by bus.
1/10

DXB-ALG. 4 hours delay without explanation and they didn't give us anything for this. The aircraft (A330) was pretty old the bathrooms were disgusting and the plane was dirty! Very poor service on-board and cabin crews are not professional. The food was not appealing. The overall service was very poor!
2/10

BRU-ALG-BRU. Both flight were late - more than 4 hours on the return flight. Food on board is average. The plane was not very clean and looks old. Personal friendly but not very helpful in the airport.
11 to 20 of 46 Reviews