✅ Trip Verified | Avianca used to be quite a fairly good airline to travel with, but have things changed. To start off with, my wife and I paid as much for Avianca's Economy Class ticket as I have paid in the past for Business Class tickets. Did not really have a choice, though, due to US borders being closed and my wife not having a Canadian visa. Ground staff was good but unfortunately belonged to Lufthansa and not to Avianca, as we started our journey in Munich. And that's about it, other than the fact that we arrived in BOG on time. Horrible value for money. Very uncomfortable seats. Filthy bathroom that did not get cleaned even once during the whole flight. Totally indifferent cabin staff. A total of 2 bottles of water (150 ml) were given to passengers during 10 hours. Had to nag cabin crew in the back of the plane to get more water. Food was bad and really not enough for a 10 hour flight. Supposedly to protect passengers, due to COVID. I will let the photo attached to this review speak for itself. Yes, this was the food that was served on a 10+ hours transatlantic flight. Extremely reduced inflight entertainment system. Supposedly also due to COVID. - There is no more lounge access available in MAD. I used to travel with Avianca very frequently and I am still a LifeMiles Gold member, yet they feel like another airline now. Will avoid them in the future as much as I can and have already switched to another frequent flyer program. 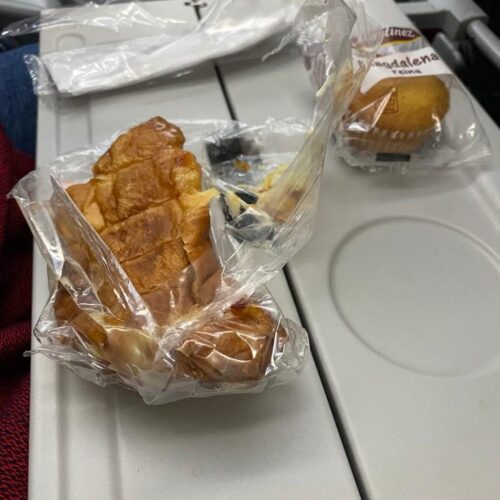 "didn't offer any change or refund"

✅ Trip Verified | They abandoned my 60 years old mother in the airport, they canceled the flight without warning or explanation, and therefore she lost the next connection. They don't answer any phones or chats, they didn't offer any change or refund, we had to go with another airline.
1/10

"Dealing with Avianca has been an absolute nightmare"

Not Verified | Dealing with Avianca has been an absolute nightmare. Bought a ticket for my senior citizen mother, and 3 other tickets (total of 4), my mother missed her flight so I called to change it, to the same departure times as mine and the 2 other tickets, 3 hours later after my payment for the extra charge had been verified I hang up. When I get to the airport, they tell me that she doesn’t have a reservation that the ticket was ever processed, that there was nothing they could do there and that I needed to call the airline and to move out of the way because she needed to help the other customers, she was so extremely rude and not willing to help us out at all. I then asked for the manager on duty, the woman was even worse, she literally looked at me from head to toe and said don’t stand here, if you want something resolved call the airline. And she asked, are you going to get on the plane? I asked her, if this was your mother would you leave her stranded at an airport at 1am which is about to close? She says I don’t care what it is you want to do, I already said I can’t do anything about it. When I called the airline the next morning they told me they had a system error and that is why the payment had not processed. And they informed me that since we decided not to get on the plane and lave our mother there that our tickets were lost.
1/10

"supervisor was very arrogant and dismissive"

By far the most horrible experience I've had, supervisor was very arrogant and dismissive. We where told to contact customer service to see what we could do after finding out that my 1yr old daughter was unable to fly because she needed a PCR covid test yet no where in the terms and conditions stated such!
1/10

Not Verified | Bought 2 tickets totaling $1,064 flying in April. Postponed them to Sept 2021 because of Covid in my family around those days. Situation changed so I sent for cancelation and refund in April. I June they finally refunded $464 claiming that $600 was for a cancelation fee. This has to be illegal and they must be exposed! I've called them several time but have been hung up. Literally, the CS person (twice) have told me they can't escalate to supervisor and hang up. They don't realize that it takes North of 2 hours (136 minutes to be exact) of being on hold before a representative answers the phone. Again, they kept $600 out of a set of tickets worth $1,064 that was canceled 5 months before the flight. This has to be the worst CS case I've ever encountered.
1/10

"turned away at ticket counter"

✅ Trip Verified | Was turned away at ticket counter due to my ticket being suspended. No advance notice was given of this and no one at the airport showed even a remote interest in helping me. They told me to call Avianca to deal with the issue. 24 hours later & numerous hours of calls Avianca explained to me that my bank would not release the payment even after I provided written confirmation from the bank that funds had been released and posted. They then informed me it would be impossible for me to book another flight because the previous flight had been suspended. My 36 hour grace period of Covid test viability had lapsed and that I should try another airline or a travel Agent meanwhile. It took 12 hours to just to get someone to talk to me about a solution to my travel situation. They have zero interest in helping fix the situation, have terrible customer service, are only I interested in pointing the finger, have no managers available even after a days worth of phone calls emails, filed complaints etc and are totally clueless.
1/10

✅ Trip Verified | On June 14 I flew from Sfo to Gua, I arrived at airport over 1hr 40 minutes before the flight time when I was in the line a lady (from Avianca) told me that the flight was closed and I needed to call a 1800 number to change my flight because it was my fault since they require to be at airport 3 hours before departure. I called that number waited over 30 minutes finally someone answer to tell me they need to transfer me to another department. I went back inside thank goodness there were electronic kiosk where I could get my ticket without any problem but I couldn’t register my bag so I flew without luggage thanks to this lady that closed the flight for 3 people including me just because there were 3 people family members of one guy of Avianca's crew, They still registered one lady that arrived 40 minutes later than me, and registered those 3 family members of that guy who where not paying a penny for their flight and didn’t care about us who were paying for our flight. I filled a claim and they never responded.
1/10

Not Verified | My parents bought flights from DC with a layover in El Salvador with a final destination to Honduras. My sister unfortunately couldn’t join anymore like originally planned so we postponed her flight. Day of the flight, our flights are nowhere to be found because they cancelled everyone’s flight. They rebook us for the next day at 4am to make our layover flight so we could use the same COVID test. When we get there at 2am, one of our names isn’t on the ticket, the name of my sister who isn't flying is. However, the itinerary they sent via email has the correct names. They’re not able to make the change for whatever reason and we lose our flights again and we can’t travel any time later because our COVID exam isn’t valid anymore. They make mistakes and don’t own up to them/fix anything.
2/10

Not Verified | Complete lack of customer oriented service. The check-in personnel were of no help to many travelers (including myself) who were told at the last minute an additional form was necessary to travel. The form was not made available in hard-copy and we were simply told to go to the Avianca website to search for the needed form. We were also informed we would not be able to board without the form. Everyone of the check-in personnel were useless. My wife managed to convince the agent that checked us in to let us go to the gate without the form and, as we suspected, the gate agent said we could simply obtain the form once we arrived at our destination! This after spending one hour on our telephones trying to find the form so that we would be allowed by the check-in agent to proceed to the gate. I am appalled by the complete lack of customer service exhibited that day by Avianca. My experience was sufficient for me to decide to not fly with them again.
1/10

"I still have had no response"

✅ Trip Verified | Avianca is hands down the worst airline I've ever flown with. If you want to talk to them, well too bad, no one gets to talk to them. After being on hold for hours, I spoke to a customer service rep, who hung up on me after I asked for a voucher for my flight. Costa Rica got shut down because of COVID, and they wouldn't even consider just giving me a voucher or rescheduling my flight. I tried chatting with these guys, they had an 8-hour wait limit, I sent in a voucher form, to which they said they would respond in 20 days, I still have had no response.
1 to 10 of 400 Reviews